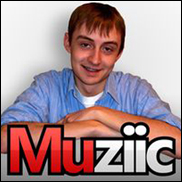 BETTENDORF, Iowa (Hypebot) – It's been a busy week for Muziic's 16 year old co-founder David Nelson. First, Nelson cleverly used YouTube's openly available API to add VEVO's music videos to his music discovery site. Muziic.com. But VEVO and YouTube (who share the same API) were none too pleased and issued a terse statement condemning Nelson's seemingly legal actions. In an email to Hypebot, on Wednesday afternoon, Nelson shared his response and as he wrote, got "a few things off of my chest".

From the start I have appreciated the concept behind Vevo – there's really no two ways about it, artists and labels need to be fairly compensated. I respect the fact that those behind Vevo recognize that the business model must change. I believe that Vevo will be very successful with what they're looking to do.

While I have not been formally approached by any of the labels, I am more than willing to work with them to help build a better business for all parties involved. I'm willing to look at all options, including revenue sharing.


Prior to Vevo's launch, I reached out to the company in effort to provide an open channel of communication and express my interest in streaming Vevo content. Unfortunately, I received no response. I do believe that if we had correspondence, this situation could have been entirely avoided.

I was as shocked as anyone when I realized there were not yet any "pre-roll" advertisements for Vevo content in the API. As an opportunist, I knew this would be a great selling point for my site (that is part of my job, of course). Another portion of my job that I take very seriously is innovation. Muziic has been groundbreaking in the area of free, on-demand streaming.

Muziic is my passion, and I take it very seriously.