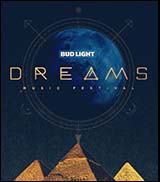 TORONTO (CelebrityAccess) — Live Nation and Ink Entertainment announced that there will be some changes to the popular Toronto-based electronic music fest formerly known as the Digital Dreams Festival.

The two-day festival will take place July 7th and 8th at Echo Beach and has been re-branded as the Bud Light Dreams Festival. Other changes this year include a new three-stage layout including a new waterfront stage.

As well, festival organizers announced a new age policy for the event, which is now open to people who are 19 years old, or older.

“With so many festivals looking to attract the entire spectrum of fans across many genres, we’ve decided to take a different approach, creating a truly unique festival experience for a defined fan,” says Mark Russell, Project Manager for Bud Light Dreams. As electronic music fans continue to mature in age and their music tastes, so too does their taste for the festival experience. “This isn’t a festival for everyone, it’s not a catchall festival, it’s for an older fan who has been to a few festivals and have come to expect as much out of the festival experience as they do the music they’re there to dance to.”

As of yet, no word has been released about the lineup for the event, but event organizers promise that it is forthcoming. – Staff Writers