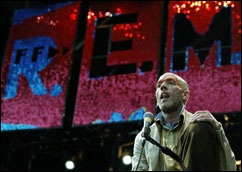 There are only nine nominated acts for the 2007 class of the Rock and Roll Hall of Fame: R.E.M, Van Halen and The Ronettes (first-timers), The Stooges (sixth time), Patti Smith (fifth time plus twice with The Patti Smith Group), Joe Tex, Chic and Grandmaster Flash and The Furious Five (three times each) and Dave Clark Five (twice).

R.E.M. is the only group nominated this year in its first year of eligibility — an act must have released its first single or album at least 25 years prior to the year of nomination. This year's nominees had to release product no later than 1981. Van Halen had been sitting on the sidelines off the ballot for the past three years while The Ronnettes could have been nominated 18 years ago. There has been a lot of pressure for the Hall of Fame to nominate The Ronettes over the years, but there has been backlash since they were considered a producer's group. The producer, of course, being Phil Spector, and the Ronettes being one of his singing productions.

Five of the nine acts will be inducted on March 12 at the Waldorf-Astoria in New York. In past years, there has always been a final ballot of at least 15 nominees. There has been no mention of nominees for other categories: early influences, non-performers, life time achievement award, in the non-performer category and the elusive but practically all forgotten sidemen category. –Bob Grossweiner and Jane Cohen