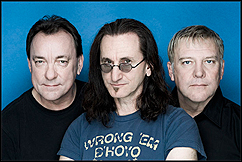 The renowned Canadian rock trio's first new collection of original material in nearly five years, the album will be released in the UK on Monday, April 30th, and the US on Tuesday, May 1st.

“Snakes & Arrows” was recorded in the fall of 2006 with Grammy Award-winning producer Nick Raskulinecz (Foo Fighters, Velvet Revolver) with Rush co-producing. The album's first single, Far Cry, initially impacted on US rock radio station in mid-March and the overall reaction has been nothing short of ecstatic. Far Cry has a digital only release in the UK, through Atlantic Records on April 16th.

Since releasing its self-titled debut album in 1974, Rush has been universally regarded as one of the most inventive and exciting groups in rock, famed for Lee, Lifeson, and Peart's virtuoso musicianship, epic soundscapes, and dramatic lyricism. The band's extraordinary body of work – which includes such acclaimed works as 1976's "2112," 1981's "Moving Pictures," 1996's "Test For Echo," and 2002's "Vapor Trails" – has achieved worldwide sales exceeding 35 million units.

Rush – Geddy Lee, Alex Lifeson, and Neil Peart – will also be embarking on a world tour, the band's first since 2004's "An Evening with Rush: 30th Anniversary Tour."

The full list of tour dates are as follows: