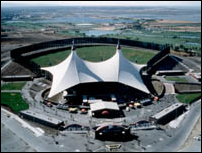 (CelebrityAccess MediaWire) — An updated county-commissioned audit of the Shoreline Amphitheatre books and a city report say that Live Nation was involved in the “ethical and legal compromises” of a “neutral” auditor and that it owes the city of Mountain View, California, $15.6 million in damages.

As Mountain View and Live Nation get set for court, the city has hired an auditing firm to dig up financial records to prove Live Nation has hidden revenue from the city. To date, the audit covering the years 1999 to 2004 has cost the city $484,000, according to the San Jose Mercury News.

An audit report released last August concluded that Live Nation, at the time doing business as Clear Channel Entertainment, owed the city $3.6 million in underreported revenue and damages. Since then, the auditing firm has uncovered more money.

About $54 million was excluded from the gross receipts of shows at nearby venues, said a report drafted by City Finance Director Robert Locke.

According to Live Nation’s lease agreement at the venue, the city is entitled to about 6 percent of rent on gross receipts put on by Bill Graham Presents – the subsidiary company of Clear Channel which operates Shoreline Amphitheatre – at any venue with a seating capacity of 7,000 or more, within a 35-mile radius.

Live Nation has repeatedly denied the allegations. The promoter and the city are scheduled to meet in court on April 10.

“At this point, we’re ready for trial,” City Council Member Tom Means told the paper. “We will win on the issues.” –by CelebrityAccess Staff Writers