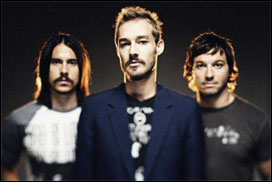 HOUSTON, TX (CelebrityAccess MediaWire) — Silverchair has announced their third US tour this year and its already starting to sell out.

Fresh from victories at this year's ARIA awards, where they netted the trophy for highest selling and "best" single of 2007 for the track "Straight Lines," the Newcastle trio's album "Young Modern" climbed back up the ARIA charts to #10. Sales for the album were bolstered by the repackaging of limited edition versions, replete with a DVD, featuring videos and a 'making of' feature.

Fans may also be enthused to learn that the group has been working with remixers, most notably Sydney's The Presets, who's retooled version of Straight Lines dropped on November 19th.

Australian fans aren't being left in the cold either. The band has just been announced in the lineup for the Big Day Out festivals in Oz, along side of other announced acts such as Rage Against the Machine, Bjork, Arcade Fire, Pnau, LCD Soundsystem and many others.