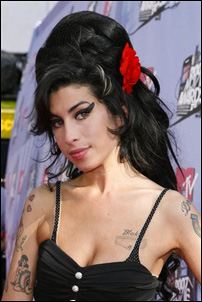 LONDON (CelebrityAccess MediaWire) — Amy Winehouse has cancelled all of her remaining tourdates and promotional appearances for the rest of the year. A statement on the troubled singer's website said that due to "The rigours involved in touring and the intense emotional strain that Amy has been under in recent weeks have taken their toll. In the interests of her health and well-being, Amy has been ordered to take complete rest and deal with her health issues."

The emotional strain likely refers to the legal imbroglio Amy's husband Blake Fielder-Civil has found himself enmeshed in. Fielder-Civil was recently informed that he would be spending the holiday season behind bars for allegedly "perverting justice" when he tried to bribe a pub owner to drop assault charges that man had brought against Fielder-Civil.

According to the Telegraph, the cancellation for the tour was announced by the singer's management after Winehouse did a no-show at a 6,000 capacity sellout in Bornemouth and showed up late to two prior gigs at Brighton and London's Hammersmith Apollo where she was eventually booed off the stage. She has aroused the ire of fans at other recent gigs as well, appearing to be intoxicated during performances, staggering on stage and forgetting lyrics.

"I can’t give it my all onstage without my Blake. I’m so sorry but I don’t want to do the shows half-heartedly; I love singing. My husband is everything to me and without him it’s just not the same." Winehouse said.

Refunds for tickets to the canceled gigs will be available at the point of purchase. – CelebrityAccess Staff Writers