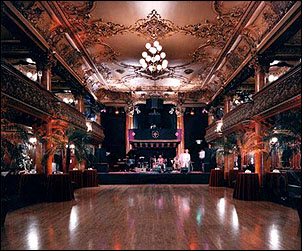 San Francisco's Great American Music Hall, on the market since March, is gearing up for business once again. The owners of San Francisco nightclub Slim's, assembled a group of investors to purchase the legendary venue. Ownership is expected before the end of the year.

Dawn Holiday, Slim's general manager, plans on upgrading the Music Hall's sound and lighting systems and says that ticket prices will decrease because the two clubs won't be fighting for the same artists.

The Music Hall, built in 1907, has a colorful history. It has served as a restaurant and bordello, and was home to the Grateful Dead's legendary 1975 live album, One From The Vault.