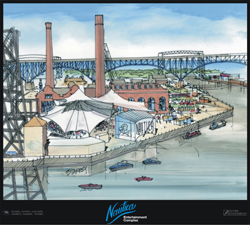 House of Blues Concerts has become the exclusive promoter and manager of Cleveland's Nautica Stage, having entered into a 15-year agreement with Jacobs Investments, owners/operators of the Nautica Entertainment Complex.

Numerous renovations are underway with Spring 2002 as the targeted date of completion, just in time for the new concert season. Among the upgrades are increasing its capacity from 4,000 seats to 5,000, VIP amenities, permanent restrooms and a tensile-style roof. Concession stands, dressing rooms and production offices are also planned.

HOB, which already manages the city's 19,500-seat Blossom Music Center, will open an office in the city.