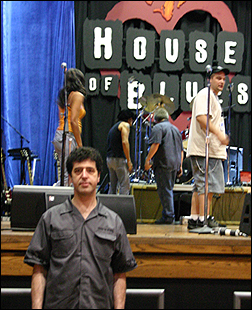 (CelebrityAccess MediaWire) — As promoter Stan Levinstone stood in front of the soundboard staring up at the rigging above the stage, it was obvious that he meant what he said.

“It’s amazing,” he says. “This is really just one of the nicest venues in the country. Everything’s first class – it all came together just right.”

Levinstone’s pride in the new House of Blues Atlantic City is well deserved. The innovative 2,300-capacity club, set up with a beautifully decorated general admission dance floor and bar on the first level and a second story balcony complete with private box seats and full service bars, is a true sight to be seen.

Surrounding the stage’s state of the art lighting and sound systems is a blue glow, hauntingly illuminating the folk art and worldwide-religious symbols on the walls – providing a halo around those gracing the stage.

The music hall is the main focus of the House of Blues’ new presence at the Harrah’s Showboat Casino. The company has also installed one of their signature Cajun-styled restaurants, a blues-themed gambling floor and poker room, and Worship, a completely unique nightclub.

“Performers know this is a great house, as soon as they see the set up,” Levinstone says. “We’ve attracted so many major headliners that don’t normally do these size venues, because we just have so much to offer here. It really sells itself.”

He regards his new position as talent buyer at the newest HoB venue as reward for his 25-year career of booking smaller clubs up and down the east coast.

“It’s opened up new horizons for me,” he told CelebrityAccess. “It’s hard to get the respect you need booking small clubs. Here, we booked acts like Duran Duran and the White Stripes even before construction had finished. The House of Blues name has such a great reputation.”

Levinstone said his years spent at Concerts East helped him to prepare him for working with bigger acts, but was nothing like the House of Blues experience.

“At C.E., we had a relationship where we worked together, but were always going our separate ways – separate bands, separate venues. There were different goals for everyone at the company,” he described. House of Blues, he said, “works as a multi-leveled team. Everyone, from the Showboat staff up to the front offices, help to make everything run.”

The new House of Blues is the first venue of its kind in the Atlantic City area, and plans to capitalize on the market.

“We just need people to come down and see the place; that will create a buzz for the venue,” Stan says. “We’ve had Smokey Robinson’s agent Rob Heller [from William Morris Agency] and Rusted Root’s manager Rob Kos [from Doyle Kos Entertainment] gushing about the venue. Everyone from the Black Eyed Peas kept saying how much they loved it as well when they were here.

“Having both Harrah’s and the House of Blues behind us, we can do so much that you couldn’t think of with other venues of this size. Between the hotel, food and beverage and gaming, we are able to get so much more than most mid-sized theaters.”

The schedule for the summer and fall included acts as huge as rap megastar Eminem and alternative rockers Live, but doesn’t focus primarily on instant sell-outs.

“We’ve got 10-12 major headliners on the schedule, but mix it up with the Chevelle’s of the world, the John Legend’s, the Used’s, the Coheed and Cambria’s. While the big shows guarantee ticket sales, these are the shows that really make money in a place like this.”

Sitting down with Stan on the final day of the Atlantic City House of Blues’ grand opening, before Buddy Guy and the Blues Brothers, featuring Jim Belushi and Dan Aykroyd, take the stage, it is obvious that he considers his position reward for his time and effort in the biz. At this point in his career, he shows complete confidence in knowing the industry inside and out, and feels his skill is a true asset to the HoB company.

He admits that his laidback demeanor isn’t just a front; it’s how he lives and works: “As long as you do what you need to do, and you do it well…” he trails off and looks around proudly at his new digs.

“When I worked for myself, I was always at my shows, always on the phone, always working. I had to wear a lot of hats. Here, it’s a completely different mentality. HoB is just a great machine. It’s a real eye-opening experience.

“When I got into this business, it became all encompassing. Before, when I was on my own, and even with Concerts East, if I wanted to go to a Yankees or Giants game, I had to really set aside time,” he explains. “Here, I get to make my own time. I get nights and weekends, which I’ve never had before.

“I even get my own assistant soon,” he laughs. “My first assistant. It’s going to be great.”

He claims his humble beginnings in the industry make him more well-versed in the whole music business than most.

“I just always loved music, and first wanted to do radio or TV. So I got my start doing production and working boards. I still listen to a lot of radio, and have always stayed on top of current trends in music as well, so I’m more versatile than a lot of guys doing the same job as me.”

Levinstone’s success in the business can be attributed to his attitude, which is obvious from the moment you meet him. He obviously loves what he does and cares about his acts and audience, and draws from experience and lessons learned in everything he does.

“One person that truly made me love my job was Warren Zevon,” Stan recalls. “He used to make me get up on stage and M.C. him. He would always make he give some goofy speech before he played any of my shows.

“He was the type to really make me feel how great it is to be in this business.”

He also gives credit to those behind the scenes as well.

“Jon Podell [from Podell Talent] is one of those guys that just always amazed me,” he says. “His story in the business is just legendary. Bill Graham was of course a big influence on me as well. He just loved doing what he did, and that made me want to always stick to what I loved.”

His advice to those trying to break into his position follows this same mindset.

The Zen-like décor of the House of Blues rooms at the Showboat Casino match Levinstone’s attitude toward his new gig and place in the business.

“I’ve always felt that in life whatever you put out comes back to you. I just want to feel like I accomplished something and to leave something behind,” he says.

“I guess this is my proof that I did something right.”

Stan can be reached at 609-343-5725 or by email at slevinstone@hob.com. –by CelebrityAccess Staff Writers