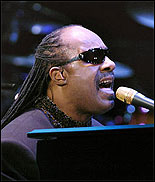 (CelebrityAccess MediaWire) — Stevie Wonder once again is making music history by implementing a landmark music video innovation for his new song "So What The Fuss." For the first time in music history, the new clip will contain a second, descriptive audio track, recorded by hip hop star Busta Rhymes, to be made accessible to people who are blind or have low vision. Two versions of the video will be released: The first will be a traditional music video, serviced to music channels; and the second version will be accompanied with the ground breaking video description technique, which airs on all SAP-accessible Television channels.

"Until now music videos have been very one dimensional for those who are blind or with low vision," says Wonder. "Now all music video fans will be able to apply their vision to my video thanks to the descriptive technique and of course, a great narration by Busta Rhymes. For me, the entire concept is indicative of what happens when you go beyond the status quo and open yourself up to what's possible."

On Wednesday, May 11, Yahoo! Music will have the on-line premiere of both versions of the video, bringing this new description technique to the music community on the web.

Linda Idoni, West Coast director of operations for the Media Access Group of WGBH, Boston's public TV station that pioneered the video description technology and wrote the narration for the video, says that Wonder's interest in video description enhances awareness about the technical capabilities now available to the visually impaired. "Until now, a visually impaired music fan would be missing out on key elements of music videos. For Stevie Wonder to embrace the description process enables a lot of passionate music fans to enjoy the song in a whole other medium."

"Stevie Wonder is an American icon," says Rhymes. "Without him, most of us never would have picked up a microphone. Only Stevie could come up with a way to let fans that have never seen a video take part in the whole vibe. It was a great project to work on from start to finish."

"So What The Fuss" is the first single from Stevie Wonder's soon to be released album, A Time To Love. –Bob Grossweiner and Jane Cohen