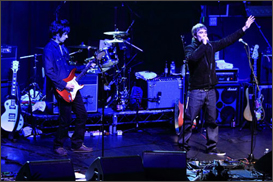 AMSTERDAM (VIP-NEWS) — Stone Roses fans were left confused after the reformed band failed to play an encore at a gig in Amsterdam on Tuesday, amid reports drummer Reni had left the venue.

Singer Ian Brown appeared on stage alone at the Heineken Music Hall, to tell the crowd the gig was over.

Fans had expected to hear I Am The Resurrection, which the reformed band closed a show with in Spain on Friday.

Many of the fans present then booed the 49-year-old frontman's announcement, according to BBC journalist Peter Shuttleworth, who was at the concert.

"Ian just said something like 'Come on, get all your negative vibes out on me. I can take it'," he said.

However, Shuttleworth claims the jeers were "short-lived" and fans were "more bemused than disappointed".

He added: "People were just looking at each other thinking 'what's going on?'"

He also disputed reports that Reni – real name Alan Wren – had stormed off stage, saying that he and guitarist John Squire had hugged as they left.

The band seemed to have expressed plans to play an encore, telling fans: "If you want us to come back, we're going up four storeys, so you have to cheer loud".

The Stone Roses kicked off their first tour in 16 years in Barcelona last weekend. They have a summer of dates planned, including three homecoming shows in Manchester's Heaton Park at the end of June.

Fans have dismissed speculation that the gig in Holland signals problems for the rest of the tour, calling the show "quality" and the crowd "enthusiastic".

Several reports quote an insider who suggested there had been a problem with the drum kit, but this has not been confirmed.

Paul Roberts was at the gig and emailed BBC 6 Music: "At one point I saw Reni waving his arms wildly at the stage mixer, obviously not happy with something."

Another, Matt Morris, claimed Brown's announcement "was followed by a volley of beer thrown at the stage and booing".

Remaining dates on the Stone Roses tour are expected to go ahead as planned, with the band due on stage in Sweden on Thursday.