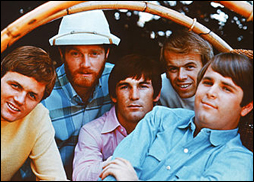 Robert DeNiro testified for Martin Scorsese. Even Francis Ford Coppola. How great was the "Godfather"? Certainly better than "Raging

Bull". "Godfather II" is my favorite movie of all time, it’s even better than "Citizen Kane".

Steve Martin had to endure an abusive father. Who wrote a negative review of his son’s debut on SNL for his company newsletter. They showed

a clip from "All Of Me". A truly classic performance.

Diana Ross didn’t write the tunes, but she was a star.

As for the pianist… He was so into the tribute performances. He was not passive, he was an active teacher.

But none of them held a candle to the Beach Boy, the man seemingly locked in his body, who wrote the best American music of the rock

generation. He took us from the beach to cars to love. His music is the soundtrack of our lives.

All the way from Hawthorne, California, ladies and gentlemen, THE BEACH BOYS!

Brian got a Standing O for his tribute film. No other clip-fest got anybody out of their seats. When the musicians started playing his

If this wasn’t a joyous occasion, WHAT IS?

We live in a fucked up country. Overrun by an inept Administration and the financiers they’ve enabled. Our values are completely screwed

up. Money is king. But money can’t buy you love.

Love is something that’s in the air, enabled by a sound, that reaches through the ether into your eardrums. You can be penniless, you can be

sans love, you can think the world is against you, but then you hear "Good Vibrations" and you forget about all that, you’ve got hope.

Lyle Lovett did a decent job on "God Only Knows". Hootie & the Blowfish can’t get arrested, but somehow they got this gig to do bar band

versions of some of the greatest music of all time. Then there was a boyhood choir, from all the way across the pond, and they sang "Love

From Brian’s very first solo album. The one in 1988 that was so hyped, yet ultimately disappointing.

Still… Isn’t love and mercy what we need tonight?

Who’s gonna send this message other than a musician?

You wonder why corporations have no place in music. Because their values stink. Those entities throwing dollars at your act are trying to

get a free ride on your elixir, which their products will never contain. They want part of your unadulterated truth. Which can only exist

And no art form touches people like music. It can penetrate any soul. It requires no sit-down viewing, no particular attention. A tune can

catch you when you’re not paying attention, and grab you by the hand and take you to a land where love and happiness rule.

Brian Wilson knows this land. He just wasn’t made for our times. He was gentle in a world that demands you be ruthless. Maybe that’s why

But before he left us, he delivered the secret of life, that inspired not only the lads from Liverpool, but seemingly every living soul in

I live in California because I had to get closer to the myth. Of having fun, fun, fun in the little deuce coupe. That world may not really

exist, but it doesn’t have to, it’s in my mind, it was put there by Brian Wilson.

Brian, I LOVE YOU!