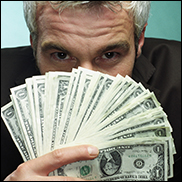 
This makes me feel inadequate. It makes me realize I'm not a businessman. Because a businessman puts the money first, and will do whatever it takes to not only generate revenue, but put as much as possible into his own pocket. It also makes me realize I've been a victim of the press, of the penumbra, I'm an end consumer, whereas to know what's really going on you have to go to the heart of the matter.

And that's not me.


The best managers function in uncharted territory. Don't limit yourself to music, this is the story of tech. It was for nerds in Silicon Valley, most people didn't pay attention until Apple went public. And then Gen-X'ers started computing whilst their baby boomer brethren saw no need for a box. But it's the children of the boomers who truly ran with tech, they saw the power of digits, they revolutionized society, and we just bask in the utility of Facebook and Uber and…


The same way boomers used to revel in the sounds of the Beatles.


We had no idea what made them successful. We thought we did, we hoovered up all the information we could, but we had no access to those pulling the strings, who were inventing it along the way.


This documentary starts with Colonel Parker. For this carny bloke it was all about the money. He smelled opportunity. That's what the unwashed don't understand about managers, they sniff well for talent. And the talent they're looking for is the ability to cause a reaction, that will get people to open their wallets. Every act does not deserve a manager. And although great acts are few and far between, managers focus not only on musical talent, but marketability, moldability… The Beatles were scruffy, Brian Epstein made them clean-cut.

No one knew there was that much money in music. Only outcasts were in the field. Gay men who knew what the little girls wanted. Wet behind the ears twentysomethings who could not get a leg up at the corporation. Scrappy free-thinkers.


Andrew Loog Oldham didn't stand by the stage self-satisfied when his proteges the Rolling Stones were doing their act, no, he went to the back of the hall and started screaming, to get the girls to do so too.


Simon Napier-Bell took Wham! to China for the publicity. A great manager is a manipulator, he sees the world as his stage, he makes way for the artists to create. As Bill Curbishley says, artists are defective, they're missing something, it's the manager's role to fill that hole.


So if you're good at math, well-adjusted, educated and your life is rife with opportunity…


You're probably not gonna make it in music.


But if you can't get up in the morning. If you're alternately smooth and awkward. If you have trouble with authority… You might be a star, if you catch the eye of a great manager who allows you to be you, full time.


That's the story of the modern music business. Not the acts eaten up by the public, they're just the product, like Barbie or the Pet Rock. Rather it's the people who foist them upon the world, who convince people to open their wallets, who are the engine of success.


You can go to music business college, you can read Don Passman's book, you can be a student of the game yet still be unsuccessful. Because it's not about what you know but who you are. Are you the kind of person who artists can trust, who will see you as their best friend, who can open doors for them, be fair to them and make headway?


Then you're on the road to success.


The greats can always get more artists. The greats are always pivoting. Maybe moving from management to promotion to comedy to…


And the greats are always standing up to institutions. Whether it be Peter Grant demanding 90% of the gross or Irving Azoff starting his own performing rights society.

Great managers don't know the word NO. And they don't focus on dreaming, on the impossible, but what they believe to be achievable. They may start small, manipulating sales reports, but then they go big. It's the only way to hold on to your client and survive.


Yes, fraud, manipulation, falsehood… They're ubiquitous in the music business. They're the grease that makes the engine hum. Sure, millennials are about honesty and transparency, but then why does Mark Zuckerberg keep changing the Facebook terms of service? Why does he keep changing the algorithms so you've got to pay to be seen?


Because he wants money and he wants to survive.


Kill or be killed.


That's how Helen Kushnick made Jay Leno famous. She was hated for it, but most managers are hated.


By the people they supersede, who are left behind, who don't have the vision and the cojones to make the world their oyster.


The doc moves on to Paul McGuinness. Turning the Irish band into a worldwide financial juggernaut.


But McGuinness got blown out when he couldn't adjust to the new world, driven by the internet.


But Braun is working in ancient territory. Creating desire in little girls who are not savvy to the world. Whereas the big money today is in creating convenience, in tech, allowing the public to become the star.


Not that there isn't money in music.


There's just a whole hell of a lot more elsewhere.

And at the center of the action you'll always find the same person. Who usually didn't go to college, frequently did not come from a rich family, who likes to tilt the playing field in his favor. The only difference is today the tech titans themselves are the stars. Evan Spiegel, Mr. Snapchat, or Daniel Ek of Spotify.


Because we need something to believe in. With people to believe in behind it. It's the nature of being alive, otherwise life is too empty.


And sure, music fills the hole. But the way it gets to us is through these scrappy entrepreneurs, they midwife success.


And if you don't know this you're destined to sit on the sidelines.


This documentary will open your eyes.


But it won't make you a manager.


Focus on what you do best. Wanting to play, wanting to be involved…that's no guarantee of success in a sphere where everybody wants in. Hell, you can't get a concert ticket because the hedge funders need to go and say there were there too.


But the hedge funders will give you their money, if you just figure out what they want.


That's what a manager does, figure out what people want and then sell it to them.


Are you a mark or a merchant?


Look yourself in the mirror and answer that question.


When you know who you are you can plot your course and reach the destination.


And if your terminus is international rock star, you need a manager. Not someone who's done it before so much as someone who can do it today. Who knows both the players and the marketplace. Who is even hungrier than you.


Don't buy the gloss, look for the special sauce.


By time it gets to you the story has been changed, spruced up, there's a patina of niceness to it. As bad as Peter Grant looked in the "Song Remains The Same," it was a smidge of his nastiness.


Nice is not a path to victory.


Unless there's someone being nasty behind the scenes, paving the way, keeping the vultures away, making you a desirable commodity.