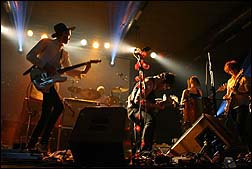 NEW YORK (CelebrityAccess MediaWire) — London-based Indie rock band The Veils are preparing for a tour of the US in June.

Originally hailing from New Zealand, the band, fronted by UK singer/songwriter Finn Andrews has been compared to The Smiths and Joy Division.

Undergoing some lineup shuffles after their first album, their sophomore effort "Nux Vomica" has garnered considerable praise, making it onto 13 different music critics 'best of the year' lists.