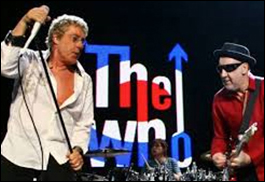 
In her mid-afternoon set on the Pyramid Stage, Patti Smith was joined by the Dalai Lama, bringing on the 80 year-old Tibetian religious leader so that the crowd could wish him a happy birthday. The punk poetess, who has a longstanding interest in Buddhism, had prepared a poem in the Dalai’s honor, and after he was escorted onstage by festival organizer Emily Eavis, he gave a short speech on the importance of friendship to living a happy life. Following a mass singalong to ‘Happy Birthday’ – and the cutting of his cake – Smith’s barnstorming set continued with ‘People Have the Power’, before ending with a cover of The Who’s ‘My Generation’.


Lionel Richie drew one of the biggest crowds of Glastonbury 2015 to The Pyramid Stage for his Sunday afternoon Pyramid Stage performance in the ‘legends set’ that drew crowds stretching to the very edges of the arena. Richie seemed overawed by the size of the crowd, clapping the audience after ‘Say You Say Me’ and asking “What the hell is going on?!” twice following a performance of ‘Dancing On The Ceiling’.


Palma Violets played a shambolic mid-afternoon slot on the Other Stage. Bassist Chilli Jesson had a cut nose and, halfway through the set, cut the fingers on his right hand, covering them in blood. Headbanging and hammering at his guitar, Jesson eyeballed the crowd during `Best Of Friends` and leant his head on guitarist Sam Fryer`s neck. The south London quartet played tracks from recent second album `Danger In The Club`, with `Girl, You Couldn`t Do Much Better On The Beach` and `Walking Home` getting the noisiest reactions.


Belle & Sebastian frontman Stuart Murdoch told his audience at Glastonbury’s Other Stage that he worried he was risking a “Kanye style rant” after speaking about the Scottish independence referendum as the band played well-loved single ‘The Boy With The Arab Strap’. Murdoch was improvising lines for the song as a group of fans from the crowd danced at either side. He stopped himself, saying, “I don’t know why I said that in an American accent,” before speculating it was because they were shy after “all that election stuff.” He told the crowd “I don’t know what happened there,” before going on to say the band hoped for a country that was “super green and super cool. Super fair, but not super rich or super poor.” He went on to say that Glastonbury was the “best little corner of England”.


Samuel T. Herring may have tumbled onto his backside during Future Islands’ Other Stage set, but it didn’t stop the band from winning the hearts of the crowd – and nor did it inhibit Herring’s penchant for idiosyncratic dance moves. Celebrating the 991st show of Future Islands’ career, Herring fell over at the end of opening song ‘A Dream of You and Me’, but was soon back to his high-kicking best as the band tour through a set which peaked with last year’s breakthrough hit ‘Seasons (Waiting on You)’


Dressed in a mod parka, possibly a nod to main stage acts Paul Weller and The Who, Jamie T’s set on The Other stage was watched by The Maccabees and Florence Welch and saw singalongs to `368`, `Rabbit Hole`, `Sticks and Stones` and `If You Got The Money`.


Paul Weller was feeling the pressure in his Pyramid Stage set, directly before The Who. He told the crowd: “We’re on limited time tonight, we’ve only got 25 minutes left and we’ve got about 40 songs to play.” His set focused heavily on recent material, but managed to find time for old favorites ‘You Do Something To Me’ and ‘The Changingman’ and Jam tracks ‘That’s Entertainment’ and ‘Start’.


FKA Twigs played two news song – ‘Figure 8’ and ‘In Time’ – during a highly choreographed performance on the West Holts Stage. The singer, whose real name is Tahliah Barnett, was joined onstage by six male dancers, most of whom were topless. After playing ‘Glass & Patron’ she told the audience: "Thank you so much Glastonbury. I just wanted to say thank so much for being here with me.” She referenced her Gloucestershire heritage as she explained how happy she was to be able to share her music with the Glastonbury crowd.


The Chemical Brothers headlined The Other Stage, going up against The Who at Glastonbury for a second time – the two acts were in the same slot on the same stages in 2007. The brothers played for just over an hour and a half, during which fans waved flares as they remixed and distorted version of many of their tunes, including Flaming Lips collaboration ‘The Golden Path’. They ran over their allotted 11:15pm closing time, before finishing their set with ‘Galvanise’, just as the Arcadia spider started spewing flames.


The Who headlined the Pyramid Stage on the final night of Glastonbury 2015, telling the crowd, “Here we are again. We’ve got a lovely, simple job to do tonight which is to send you home happy and maybe a bit deaf. So here we are.” Their set finished with guitarist Pete Townshend taking a potshot at Saturday night headliner Kanye West. Referring to West’s claim that he was “the greatest living rock star on the planet” during his set, Townshend described set-closer ‘Won’t Get Fooled Again” as “big and rebellious” before adding, “who’s the biggest rock star in the world?” to cheers from their crowd. –According to NME.com