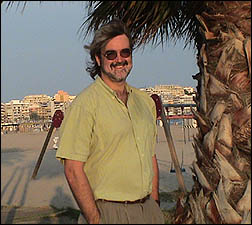 (CelebrityAccess News Service) – Thom Wolke has left his position with the Claremont Opera House in Claremont, NH, as executive director and has resurrected his old arts and entertainment production company, Twin Cloud Concerts, Inc. He will also continue to offer assistance at the Opera House as needed.

“It was really a mutual decision that developed earlier this year,” says Wolke. “The Opera House is, like many arts organizations nowadays, struggling not only with funding but with identity issues. The Opera House needs to assess its place within the community at large and not just within the borders of its own town.”

Wolke was hired as an independent contractor by the Opera House in October 2000 and given the title of executive director. It was their first attempt at hiring a full-time position after having a part-time manager for several years. His main priority was to raise the Claremont Opera House’s visibility in the Upper Valley and the Bi-State region and to raise the caliber of artists performing there.

“I inherited the first season from my predecessor and brought the season in under budget,” Wolke says. “Of course the following year, the first season I actually booked, began two weeks after 9/11 so it was an inauspicious beginning."

“We still did pretty good that year, thanks to some ‘Enron-style’ accounting tricks,” Wolke jokes. “Actually, in all seriousness, it was important to restructure some things financially and so a new accountant was brought in, and we worked with our treasurer Roger Formidoni to more correctly align and amortize some of the organization’s assets.”

This past season, despite increases in both memberships and corporate sponsorship revenues, the season still wound up in the red. “It’s quite simple,” Wolke says. “No one came to shows. It didn’t matter whether it was a swingin’ Country show like Asleep at the Wheel or a world-class symphony from Hungary, no one came.”

“And this issue isn’t just confined to Claremont, so there’s no need for self-flagellation," he says. "Many arts organizations nationwide struggled and continue to struggle with attendance issues. People are just ‘cocooning’ right now, confining themselves to the creature comforts of their own homes and VCRs, shying away from the joys that come from fraternizing with their neighbors. Actually, the Opera House is situated pretty well, weathering this recent ‘storm’. Many other institutions are in much worse shape and teetering on the brink of ‘extinction’. Whether they know it, or care to admit it, is another story. Hopefully the Claremont Opera House will survive in one shape or another, everyone just needs to come together and do their part.”

The Opera House board of directors cut Wolke’s fee in half beginning April 1 and let him go at the end of the fiscal year June 30. “Actually, they were very kind to me at the end, giving me a small bonus and nice ‘parting gifts,’” he quips. "With the exception of a part-time office manager, they’ll run things with volunteer staffing."

Wolke will continue his small, independent promotions and management company, currently located in his Meriden, NH home. Thom has also managed Guy Davis for almost 10 years and has recently begun work with Adam James, a Neo-Crooner ala Frank Sinatra.

Twin Cloud will also promote the Little Feat concert in Claremont on November 6 and is looking to expand a little by utilizing other venues in the Upper Valley. Iron Horse Standing Seam Roofing of Croydon, NH is sponsoring the show.

“I learned from working with them when they did my roof that they’re very into the great classic rockers like the Feats and The Band. So, it was only natural that I asked them to join me on this show,” Wolke adds.

“Actually, the company purred along in almost idle mode presenting a few shows independently now and then, including Suzanne Vega, Sam Bush and with Steve Earle in Claremont and several shows in Tarrytown, NY, where I was based for 15-plus years,” Wolke confides. "But now I’m free to explore many other ideas. I'll continue with shows in both towns as long as I can."

Wolke is currently evaluating several options on the table at the moment. "I’m fortunate enough to have a variety of skills to offer," he says, "and I’m feeling very relaxed, which is kind of an odd feeling for me, as the process moves forward. One thing I really enjoy doing is putting together creative and successful sponsorship promotions for companies to create enjoyable experiences for patrons and sponsors alike. The trick is knowing what the sponsor wants even if they don’t know it yet!”

“I felt very strongly that the Opera House needed to position itself alongside area craftsmen, artisans really, to show-off the relationship of all art, whether crafted or performed,” Wolke explains, “But you need to analyze the sponsors’ needs too, and then see how that fits into the marketing plans of your organization. It takes time and creative thought, not to mention it’s really a lot of fun!”

“So, now it’s off to look for life’s next big adventure!” Wolke proclaims.