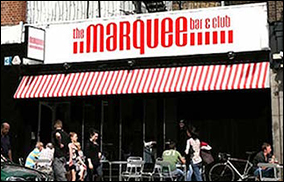 
The amended legislation comes into effect on April 6 and means property developers are now required to seek prior approval on the impact of noise from existing music venues when applying to transform office space into a residential building.


It follows a wave of small- to medium-sized concert hall closures in London over the past eight years during which the capital city has lost 35% of its grass roots music venues.


Some of the historic venues that have shuttered in the past decade include The Marquee (pictured), Astoria, 12 Bar Club and Madame Jojos, with dozens more shuttered throughout the city`s outskirts. Last fall, The Coronet announced that after almost 140 years it too would close its doors in January 2017.


Jo Dipple, CEO, UK Music said: “Ministers Ed Vaizey, Brandon Lewis and James Wharton deserve sincere thanks for taking up our cause and offering to act on industry concerns. There are times when it seems Government does not listen. When it does, and when it acts on what it hears, we should be proud of our political masters.


The Music Venue Trust has done an amazing job to raise awareness and push this issue to the top of the Governmental “in tray”. If these new regulations have the desired effect, grassroots venues around the UK will have additional powers to help them survive and prosper.”