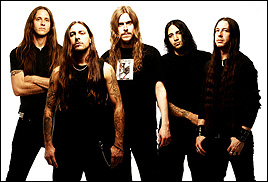 The September 7th concert for Swedish band Opeth had been sold out but a last minute decision by Queensland's liquor licensing division to block patrons under the age of 18 from attending left more than 500 fans out in the cold, ABC news reported.

David Couper, a spokesman for the venue, said that all ticketholders who weren't able to get into the venue will be reimbursed, but he added that numerous fans had spent a money getting to Brisbane in the first place.

"A ticket being $65.50 – plus a plane flight, plus accommodation, plus in some cases the possibility of having to cancel work for an evening or a day – that's a lot of money to go down the toilet because the liquor licensing division isn't capable of helping the Arena and the police to make sure that the gig runs smoothly," Couper told ABC.

"They've flown, they've spent money on accommodation and they can't go to the gig basically because of the liquor licensing division deciding the crowd and the music would be a risk to public safety." he added. – CelebrityAccess Staff Writers