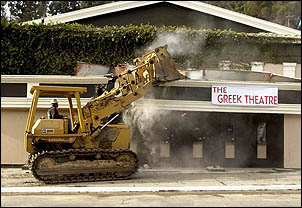 (CelebrityAccess News Service) – The Greek Theatre broke new ground November 17 with a multi-million renovation project, which is scheduled to be completed by spring 2004, just in time for the theater's 75th Anniversary.

The construction will include restoring the front of the theater to its 1930's façade as well as 35,000 square feet of improved plaza areas with upgraded concession stands; a relocated and upgraded box office, a new picnic lawn plaza located in front of the theater, and a state-of-the-art sound and lighting system. In addition, the theater's backstage dressing rooms, commissary and artists lounges will be renovated.

"The renovations will double the amount of concession areas that the theatre currently has as well as provide more amenities and conveniences for patrons and artists," said the theater's GM Mike Garcia. "These improvements will better enhance the customer's overall experience adding to the already unique and well-known Greek Theatre."

Owned by the City of Los Angeles, the Greek Theatre is managed, operated and promoted by Nederlander-Greek Inc. Recent seasons have featured performances by a diverse group of artists such as The Who, Sting, Norah Jones, Pearl Jam, Jose Carerras, Marc Anthony, Tina Turner, Elton John, Santana, The White Stripes, The Gipsy Kings, the Veriovka Ukrainian National Song and Dance Troup, among others. Last year, the Greek won awards for the Best Small Outdoor Amphitheatre in the country for the third consecutive year and has been nominated for the award again this year. –Jane Cohen and Bob Grossweiner

Dave Lucas, president of Clear Channel's concert division, said that a lot of shows miss Indianapolis because the 24,000-capacity Verizon Wireless Amphitheater is too big, and the 2,500-capacity Murat Theatre is too small.

No acts were announced but Lucas said to expect high profile artists.–Jane Cohen and Bob Grossweiner

Evans Moves to Executive Directorship of Stamford Center for the Arts

(CelebrityAccess News Service) – Douglas Evans, head of Connecticut’s Commission on the Arts and former director of the Bushnell Center, is
taking over as executive director of the Stamford Center for the Arts.

Evans was expected to become senior vice president of Connecticut Public Broadcasting, where he was to become principal fund-raiser, beginning in August. But because of a state ethics commission ruling, he couldn’t take the job until January due the state’s “revolving door” statute which bans state officials from going directly to work for companies that they did business with or gave grants of $50,000 or more, according to the Courant.

The performing arts center includes the 750-seat Rich Forum and 150-seat “black box” theater. There is also a
separate building that includes the newly renovated 1,500-seat Palace Theater and a new 199-seat theater, not yet opened.