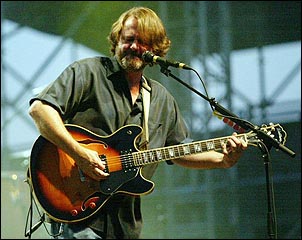 Superfly Productions and AC Entertainment have released the initial lineup for the 2005 Bonnaroo Music and Arts Festival, which includes two performances by Widespread Panic and a first appearance by the Dave Matthews Band.

The fourth annual, three-day camping and music festival will be held on June 10-12 on the same 700-acre farm in Manchester, TN, 60 miles south of Nashville. When all the artists are booked, the festival will once again present 60-plus acts and numerous attractions.

Returning alums include Widespread Panic, The Allman Brothers Band, and Jack Johnson. In addition to DMB, other newcomers to the festival include rock bands Modest Mouse and The Mars Volta, soul prodigy Joss Stone, and bluegrass band Alison Krauss and Union Station.

Distinguishing itself from the traditional rock festival, Bonnaroo provides its fans with an abundance of art and entertainment options in addition to creative music programming. The festival's non-music activities have included a 24-hour cinema, a classic arcade with over 100 games, a brewer's festival featuring the country's best micro brews, an authentic Mardi Gras parade and much more. In 2004, Bonnaroo unveiled a special comedy tent featuring some of today's hottest comics, and introduced a gang of street performers who roved the grounds wowing fans. Bonnaroo is also a tech savvy event with wireless hot spots throughout the grounds, a digital message board system, an Internet cafe, and a music sharing village. While keeping some favorites from the festival's first three installments, Bonnaroo 2005 will also introduce many new surprises.

"For its magical atmosphere, Bonnaroo has provided a compelling backdrop for recent live album releases from North Mississippi Allstars and Warren Haynes," says Superfly's Jonathan Mayers. "Bonnaroo is now recognized as an event where members of an open-minded fan base discover new acts and witness special performances by their current favorites.

"Bonnaroo has sold out in advance every year, solely via the Internet, with no traditional advertising," Mayers continues. "When we first started the festival, fans responded to Bonnaroo because it was a new and interesting concept for live music, especially in this country. It's inspiring to hear that people now feel it's become a real rite of passage for music fans."

Bonnaroo has also spawned a series of corollary media products, including three volumes of live CDs and two DVD documentaries featuring live footage from the 2002 and 2003 festivals. A CD and DVD from the 2004 festival are planned for release in April. Plans are also in the works for a television broadcast of footage from the festival. Bonnaroo currently offers festival performances for download at Livebonnaroo.com and a 24-hour Internet radio broadcast, known as Radio Bonnaroo, on the festival web site at Bonnaroo.com.

Tickets for the 2005 Bonnaroo Music Festival will go on sale Saturday, January 29 at 10 AM Eastern Time through http://www.bonnaroo.com/.

Toots and the Maytals