After today’s presentation I’m leaning towards the latter.

To tell you the truth, I’m so high on carbs, having eaten so many slices of pizza, I’m grinning from ear to ear. For connoisseurs, you know that it’s hard to get a good slice of pizza in L.A., just like it’s hard to get great Mexican food on the east coast. Oh, they serve it, it’s just a little off. Kinda like pastrami, it’s all good on the east coast…on the west, pick and choose your outlets. But these slices were from Jon & Vinny’s on Fairfax and they were thin and burnt, just like in New Haven, and even though I’m trying to stay away from bread, I found it irresistible. A good cherry on top of the sundae of the presentation.

So a who’s who of the entertainment business showed up at the Forum this morning for a detailed presentation on the Sphere. You know, that globe you’ve seen in trade shots, that futuristic thing you tell yourself will never happen? 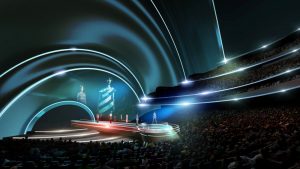 And the truth is, despite all the blowback about the web, I interact with more people online than I ever did in the old days, but there’s a certain something about being face to face. Kinda like a camp reunion. You see everybody you know you haven’t seen for a while and it’s fun. That’s why you want to live in L.A., that’s why you want to live in the big city, you can telecommute from anywhere, but you can’t get up close and personal with the people. The hang was fun. And productive.

So, the experience has been the same from time immemorial. The only thing we’ve added is amplification and a roof. Act gets on stage and the audience listens. Where you’re sitting is key. Too close and the mix is bad, too far and the sound is muddled.

But not in the Sphere.

They had a demonstration. Of the beaming technology. Every seat gets personalized sound. Dolan said in-ear monitors, wedges, were not needed at all for performers in the Sphere.

They bounce the sound to the individual, at the same volume no matter where you sit. And it sounds too good to be true, and then…

I know, I know, you don’t believe me, and I didn’t believe it either, until I heard it.

So the Sphere is a giant dome, the first to break ground in Vegas in the fall, up and running fourteen months later. The second up in London a year after that.

But you’ve got to understand, these are not just concert venues.

For far too long, Silicon Valley has wagged the entertainment industry tail. We’ve followed, not led. None of our own has broken barriers.

Maybe it takes a billionaire, which Jim Dolan is. He says he had the vision almost two decades ago, but now the technology is here.

Not only the sound, but the screen.

And there’s smellavision and they can even spray water on you and you start to think about failed technologies like 3-D and the earth-shaking system introduced for “Earthquake,” but then you realize, if only the sound works, it’s worth it.

So this is a breakthrough. Aligned with the times.

Just going and hearing is no longer enough. People want experiences. Something they can talk about as opposed to something they can own. And what the Sphere is is a platform, for creativity. Imagine IMAX on steroids. MSG has a fund for creativity, pitch ’em and they might say yes. What can you do with the technology?

And it’s not only music, but trade shows and new immersive experiences we depend on Hollywood to create.

I’d love to be a skeptic, but I’m convinced.

Or the big losses.

But this is a giant leap forward, and it’s EXCITING!