Expect very short legs. There must be a hit single on “30,” but this isn’t it. This is a setup, Adele coming out with her viewpoint, prefacing the tone of the album, I can see it from an artistic standpoint, but not a commercial one.

Adele’s success was amongst oldsters who were infected by the radio when CDs were still a thing. End result? Adele sold three times as many copies of “21” as any of her competitors, an achievement akin to Michael Jackson’s with “Thriller,” but there was that original infectious track, “Rolling in the Deep,” which begged to be replayed, it burst with energy, albeit somewhat controlled, generating a tension that’s the essence of a hit.

But there was more. “Rumour Has It,” “Set Fire to the Rain”… “21” was an album, a heartfelt work in an era representing a turning point that the mainstream media was unaware of. Not only were we switching from CDs and downloads to streaming, social media was growing, our country was fracturing, yet somehow Adele seemed to unite everybody. Selling classic music with melody and slick production in an era of hip-hop beats, selling the songs in a way none of the melisma plastic people who focused on pipes as opposed to meaning could ever do. “21” was a breath of fresh air, because it hearkened back to what once was, a world where the single was just a sales tool for the album, where the body of work was more important than any single track.

The single track dominates today. Oh, big names release new albums and seemingly all of the tracks show up in the Spotify Top 50, but soon the focus is whittled down to one. And, if the act is lucky, another one replaces it, and then another one. The most successful at this paradigm today is the excoriated Morgan Wallen, who stepped in deep doo-doo. He put out a double album which was eminently LISTENABLE! With changes and hooks and not too much of the pandering Nashville is known for. But most acts are lucky if one track sticks, and it can stick for over a year, can you say “Blinding Lights”?

So in popular music, in hit music, it’s about the track. And most people only go that far, why go deeper when the rest is endless filler and there’s so much more to investigate? Of course, every successful act has a fan base, which will go to see them live, but even if you go on a stadium tour, you only reach a small fraction of listeners. And then there are those with hits who can’t sell a ticket, and today it’s all about the tickets. Ticket sales have been the metric for this entire century, even though the mainstream hasn’t caught up. Want to see who’s a star? Check the ticket counts. As for the “Billboard” chart? It’s manipulative and unrepresentative. And furthermore, if you don’t make hip-hop or pop you’ll be guaranteed to almost never make the Spotify Top 50, even though you might be doing boffo at the b.o.

That’s the metric for recordings, Spotify. You can see how many times each track is played. The demand.

And the truth is the younger the act skews, the more plays it has on Spotify. Now as of this writing, “Easy on Me” has 40 million streams on Spotify already, quite a feat in three days, but will it sustain? I highly doubt it, because it’s not a hit single. Which is okay if hit singles follow it, and having worked with Max Martin I’ve got to believe there are hits on “30,” but once again “Easy On Me” isn’t one.

Then again, failure in the marketplace doesn’t stain your career the way it once did. As long as you follow up with a hit, the public is ready to embrace it. The old days of a calculated battle plan are history. If you’re a major act and you’ve got a hit song on your album it will surface. Fans will find it and then radio will react and…

Radio built Adele. But don’t expect much airplay on “Easy on Me” two weeks hence. It’s a snooze, it’s a tune-out. It’s a statement, but a statement isn’t necessarily a hit, just ask Bob Dylan.

And the truth is “25” was nowhere near as successful as “21.” There was pent-up demand in the marketplace, there was a tour with many fewer seats than buyers, but that was more than half a decade ago. In the interim, the music marketplace has fractured even more, everything big is smaller, universal mindshare is impossible to achieve.

But Adele achieved universal mindshare before the nichification of music. She’s really the only act everybody knows, other than the young listeners who only came of age in the past few years.

And the media has been appealing to that mindshare. There have been stories EVERYWHERE! People have asked me about Adele who don’t seem to follow popular music whatsoever. Their interest is piqued. Adele represents inclusion in an era of exclusion.

But media means almost nothing these days. All the traction happens online. To the degree radio matters, it always follows in the footsteps of what is happening online. And you can’t fake a hit online, not of multiple hundred millions of streams. The public either embraces it or rejects it.

Notice that all the talk of Billie Eilish is now about personal appearances, live, on screens. The truth is her new music resonated with a hard core but then stopped. The public has moved on. The public is only interested in hits. How many hits do you need to sustain a touring career? That’s being debated right now. Used to be pop stars’ ticket counts rose and fell with hit singles, but today it appears if you have enough hit singles people still want to see you.

So, the truth is Adele’s music is out of step with the Spotify Top 50. But that was to her advantage in the past, will it work for her today?

But in the CD world, it was sales, not spins. How many times did those oldsters play those CDs? And one thing we’ve never been able to conquer, the fact that youngsters listen to music more than oldsters. They’ll play the track dozens of times, whereas ten times would be nearly unheard of for many oldsters.

So, Adele’s Spotify numbers…can they compete with those of the hit acts?

You can see the conundrum. Everything has been quantified. CDs are history, as are track sales. In a streaming world only, can Adele maintain her status atop the heap? In a world where you have to compete with the 850 million streams of Justin Bieber’s inane “Peaches”?

It’s nearly impossible to follow up a phenomenon. Michael Jackson kept trying and it ultimately killed him. The Eagles made one more album and then broke up. Carole King had a few more hits and faded away. Alanis Morissette is still touring on one album, without “Jagged Little Pill,” no one wants to see her.

And with “Easy on Me” Adele is posturing “30” as an adult “Jagged Little Pill.” Raw and reflective in its own way.

And the truth is Adele gives one of the best performances extant. She’s one of the great performers in history. Her patter and banter with the audience pulls at your heartstrings, it’s undeniable. But when it comes to hit music…

We’ll get another rush of publicity when “30” comes out on November 19th. Stories about “Easy On Me” will fade away, because with so much in the marketplace, media moves on. As for word of mouth? We’ve never ever figured out how to measure it. But one thing is for sure, it’s faster the younger you are.

So, “Easy on Me” might be forgotten, seen as a set-up after the big hits arrive. But “Easy on Me” is neither a one listen wonder or a track that demands repeatability, as a matter of fact you might have a hard time making it through the entire thing.

But one thing is for sure, Adele will sell tickets. Forever. Maybe the new albums don’t have to be that great, maybe she can continue to experiment. Time will tell, but so far what we’ve got here is a disappointment, despite the mega streaming numbers reflecting pent-up demand. Everybody’s hungry, foaming at the mouth, and then they move on unless the new project is so interesting, so rewarding, that it is irresistible. “Easy on Me” is not. 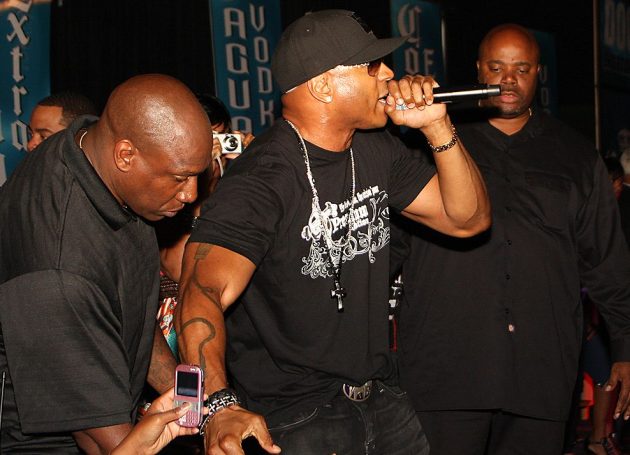 LL Cool J At The R&RHOF