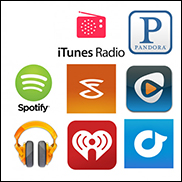 (Hypebot) –
While there are a plethora of streaming services currently available, most of which are reasonably well designed and user friendly, none of them seem to have gained enough traction as to become especially profitable, meanwhile the market has become saturated.


2015 will go down as the year that Apple, YouTube, and Jay Z all looked at the current music landscape and thought, “You know what the world needs? Another streaming service.”


Now, none of these services are bad, in and of themselves. For all the mockery of its ill-advised press conference, Tidal is a perfectly competent streaming platform with clean design, an extensive catalog, and some neat Beyoncé-themed playlists. Apple Music had some weird bugs and the Connect feature has largely flopped, but also has great curated content and a very pretty user interface. YouTube Music might not work best as a standalone app given how young people consume content, but its automatic playlist caching is excellent, and the unofficial and live content can be great for deep dives into a particular catalog.


The problem is, they are all offering variations on a not very popular theme. Spotify says it has 20 million subscribers and 75 million active users in the 58 markets where it is available — not bad, but a drop in the bucket compared to many other apps. Deezer only has 6 million subscribers, including many users who are part of bundle deals with carriers, and abandoned plans for an IPO this year. Apple Music announced 6.5 millions subscribers in October, but those numbers might shift as free trials come to an. Tidal claims to have a million users; while YouTube hasn’t announced any numbers yet (to be fair, it’s also early days for YouTube Music; its numbers could rise after the holidays if YouTube Red subscriptions become a hot gift for tweens).


All these numbers aside, the streaming market just isn’t that huge yet. For the three million people who bought the Adele album in the US, it was likely the only album they bought this year — so paying $120 a year (or more) to a subscription service doesn’t make any sense. Streaming services have also revealed themselves to be remarkably clueless when it comes to marketing — a massive street art installation a few blocks from me in Williamsburg weirdly negs the neighborhood for liking Justin Bieber, as if insulting your customers is a great way to get them to sign up. Apple Music released a deeply sexist ad which assumed women relied on their boyfriends to find music, and Jimmy Iovine doubled down on the idea in interviews. For all the YouTube ads that blanketed the NYC subway system this summer, none of them mentioned music. And Tidal’s marketing, well…we all know how that went.


The problem is, none of these services makes a compelling pitch to a mainstream listener. First, cost is an issue — if you only buy the Adele and Taylor Swift albums, paying several times the cost of those records just so you can have access to a library of music you may or may not use isn’t a good use of resources. I’ve said this before — even in 1999, the average listener was spending far less than $120 a year on music, and they have no interest in having millions of tracks at their fingertips. To reach any sort of mainstream penetration, prices will have to drop, as simple as that.


Alternatively, streaming services could become part of a larger bundle of other content. Mainstream audiences pay for Netflix, so it would make sense to do a deal with the service to charge a few more dollars a month for access to music. People have pitched the idea of adding music as part of a phone contract for ages now, and Deezer has some success with it, but it has never become a hugely popular solution, nor have some of the music services launched specifically for carriers done well.


Or maybe we’ve hit a point where we realize that streaming isn’t the answer, and that we need to figure something else out. Streaming is very dependent on devices and connectivity — if in a few years something else replaces our smartphones and wireless networks, streaming might not be the way some people consume anymore. Then it becomes much more fun to speculate — are we all going to walk around with VR goggles living inside interactive music experiences? I hope so, and also, I will gladly accept an Oculus Rift for the holidays. Maybe we’ll all just trade music through messaging apps and there won’t be a need for a central database of songs. Or maybe everyone will just make music for their friends and there won’t be any more pop stars, just people sharing songs (unlikely, but you never know).


The point is, 2015 is the year of streaming saturation. There are lots of products, most of them very good, and none getting any sort of major traction in the market. If Apple Music and YouTube Music stall, then it’s not a huge deal for their parent companies — Apple can just introduce an iPhone with, oh, a marginally faster camera, and print money; Google can just go build a self-driving car or a rocketship. Jay Z isn’t going under any time soon. Spotify and Deezer have more to lose, but Spotify at least has a decent chunk of funding and some smart people who can turn the ship in a different direction if needed.


Aside from all the streaming launches, 2015 was a fairly quiet year on the music tech front. Some companies launched and some went bust. There are a handful of companies quietly doing really good work on compelling products and a whole bunch more who claim that their artist discovery platform will be the next big thing (spoiler alert: it won’t). There are probably too many ticketing companies and not enough companies focused on helping artists monetize ancillary revenue streams (if you’re building one, hit me up).


A year from now, most of these streaming services will be around , and they might have even grown more. But as we wind down the year, they are all stuck facing an increasingly disinterested audience, and wondering just how to capture their attention.