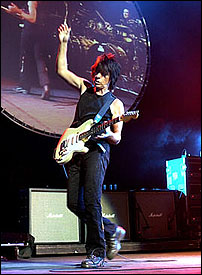 (CelebrityAccess MediaWire) —
The Rock and Roll Hall of Fame Nominating Committee has sent its voters a list of 37 potential candidates to consider for induction in the class of 2005. The voters are not limited to the 37 suggestions; they can vote for any eligible artist.

"Please keep in mind the criteria you should be considering includes the quality and influence of an artist or band and, of course, the artist must have released a record in 1979 or earlier," read the note. Each voter can vote for three candidates; we have heard stories that some voters have voted for the same artist with his or hers three votes on the same ballot. Assuming there are no ties, the 15 artists receiving the highest number of votes will be the nominee placed on the ballot.

The list is quite interesting with previously nominated artists, a few artists eligible for the first time, some runners up who never made the final ballot and some who had long been seemingly forgotten by the Hall of Fame.

Grandmaster Flash and the Furious Five, The Prentenders and U2 are the only artists who are eligible in their first year of eligibility.

The Nominating Committee went back and came up with five artists who although previously eligible never made the final ballot nor were they runners- up: Graham Parker and the Rumour, Mitch Ryder and the Detroit Wheels, Percy Sledge, Ringo Starr and Conway Twitty.

Although each of the 37 artists deserves future induction into the Rock and Roll Hall of Fame–generally six-to-eight artists are inducted each year–two of the 37 are already inducted into the Hall of Fame with previous groups:
Jeff Beck (The Yardbirds), and Ringo Starr (The Beatles). Gram Parsons, however, was not inducted as a member of the Byrds. –Bob Grossweiner and Jane Cohen