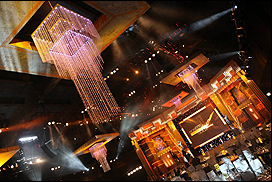 LOS ANGELES (CelebrityAccess MediaWire) — Los Angeles promoter Goldenvoice has announced that they will be taking over booking and management of the Shrine Auditorium and its Expo Hall, effective immediately.

"The Shriners are a charitable-based fraternity, and operating within the entertainment industry wasn't the primary business. Over time, the entertainment business passed them by because it wasn't what they lived day in and day out. This gives them an opportunity to bring an experienced operator to the room," Goldenvoice's Rick Mueller told the Los Angeles Times.

According to Mueller, Goldenvoice hopes to promote as many as 25 to 30 additional shows a year at the historic venue and will take over operations for the current slate of about 50 events booked at the venue, including the Screen Actors Guild Awards and the Mexican Billboard Awards.

Rebuilt after a fire in 1920, the 6,300-capacity venue has been a fixture in the Los Angeles entertainment scene, serving as the only major events center until the opening of the Music Center in 1964. The attached 54,000-square-foot Expo Hall can accommodate 5,000 and Goldenvoice hopes to stage more electronic events there.

Goldenvoice also say they intend to oversee a multi-million dollar renovation project to modernize facilities at the venue.

"We are very excited to have Goldenvoice taking over operations at the Shrine," said John Everson, president of the Shrine's board of trustees. "Their expertise, artist relationships and passion for live events is just what we need to bring a new generation of music fans to our historic venue." – CelebrityAccess Staff Writers