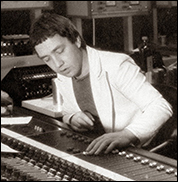 (CelebrityAccess) — George Young, the Scots guitarist for the Australian pop band Easybeats and a co-producer on AC/DCs early albums, has died. He was 70.

It is with pain in our heart that we have to announce the passing of our beloved brother and mentor George Young. Without his help and guidance there would not have been an AC/DC.

As a musician, songwriter, producer, advisor and much, much more, you could not ask for a more dedicated and professional man.

As a brother, you could not ask for a finer brother. For all he did and gave to us throughout his life, we will always remember him with gratitude and hold him close to our hearts.

While still a teen, Young emigrated to Australian from his native Scotland with his family. There, while still in secondary school and inspired by the British Invasion, Young co-founded the Easybeats, playing rhythm guitar for the band as well as handling songwriting duties along with bandmate Harry Vanda in 1964

The Easybeats scored a modest hit on Sydney radio with their first single "For My Woman" but their real breakthrough was She's So Fine" which peaked at #3 on the Australian pop charts and brought them national recognition.

By 1966, the Easybeats had scored a recording deal with United Artists Records and relocated to London where they recorded "Friday On My Mind" which proved to be their first international hit, peaking at #6 on the UK charts and #1 back home in Australia.

However, the band's early magic proved hard to recapture and subsequent releases were commercial failures. As well, internal divisions rankled the band as they tried to move away from the bubblegum pop sound that was their early trademark and as the creative team of Vonda and Young grew increasingly independent.

After a final, dismal Australian tour in 1969, the group parted ways, paving the way for Young and Vanda to pursue songwriting and the pair soon became one of the most successful duos in Australian music.

In 1974, the duo started producing for Young's younger brothers Malcolm and Angus Young and their band AC/DC, with production credits on the group's first five albums, including High Voltage (1975), TNT and Dirty Deeds Done Dirt Cheap (both 1976), Let There Be Rock (1977), Powerage and If You Want Blood You've Got It (both from 1978).

As well, the duo wrote and produced for numerous other artists, including former Easybeater Steve Wright, John Paul Young, and the Keystone Angels.

In 1988 Young was inducted, along with his professional partner Harry Vanda, into the inaugural class of the ARIA Hall of Fame.

After retiring from the music industry in the late 1990s, George Young resided mainly in Portugal with his family.