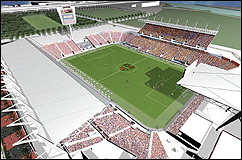 HARRISON, NJ (CelebrityAccess MediaWire) — AEG’s troubled New Jersey soccer stadium project may be under new management soon, as execs at the company have been in discussions with representatives from their partner in the venture, energy drink company Red Bull, about the future of the facility.

“All the parties have invested considerable time and resources into the development of Red Bull Park and are committed to seeing this exciting project to completion,” AEG New York president Nick Sakiewicz said in a statement. “We expect to announce plans for going forward soon.”

AEG New York released the statement following an article by the New York Daily News claiming that Red Bull was planning to buy AEG out of its 50 percent interest in the stadium. Red Bull bought the team from AEG last year, but the Los Angeles company retained its interest in the $120 million facility and planned to hold as many as two dozen concerts there each year, according to the Newark Star-Ledger.

The stadium was to be completed and ready for action by next season. However, excavation at the site turned up substantially more contamination than was expected, and the stadium opening has already been pushed back until at least late 2008 and possibly 2009. –by CelebrityAccess Staff Writers