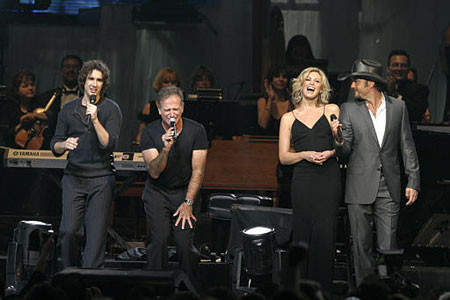 (CelebrityAccess MediaWire) —
Andre Agassi and a superstar lineup of entertainers took the stage on October 2 at the Grand Slam for Children in Las Vegas, presented by Aramis and Designer Fragrances to benefit at-promise youth organizations in Southern Nevada. The Andre Agassi Charitable Foundation (AACF) raised more than $6.1 million during the weekend benefit, which featured a black-tie VIP dinner, live auction and concert held at the MGM Grand Garden Arena.

"Once again, I am overwhelmed by the ongoing support the Grand Slam for Children receives each year from fellow Las Vegans, national business leaders and the entertainment industry," Agassi said. "It is gratifying to know that the money we raised tonight will directly benefit children who require our immediate assistance."

More than 2,200 VIPs and corporate sponsors attended a pre-concert reception and dinner. Following the pre-event celebration, the AACF hosted a live auction with items including a private tennis clinic with Agassi and Stefanie Graf; dinner with Robin and Marsha Williams; a custom-designed meal prepared and served by Chef Emeril Lagasse in New Orleans; and a trip for eight to an exclusive private villa in Anguilla, West Indies.

The Grand Slam for Children concert fundraiser benefits the AACF, a not- for-profit organization established in 1994 to assist at-risk youth in Las Vegas, where Agassi was raised. More than 77,000 fans and VIP guests have attended nine Grand Slam events, raising more than $42.2 million for charity.