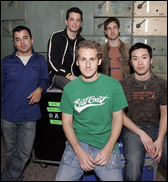 WANTAGH, NY (CelebrityAccess MediaWire) — Alcohol, youth and O.A.R. concerts seem to have fueled quite the ‘rager’ at Jones Beach where concertgoers threw beer bottles, stood on car rooftops and flung young women in the air, according to police officers trying to control the pandemonium outside the show.

At least a dozen people were hospitalized for alcohol poisoning, several underage, according to Newsday.com.

Fans often get rowdy before and after the concert but the band O.A.R. seems to draw a younger crown that is a bit more zealous than your average concertgoer and seems to cause a bit more of a ruckus.

"This happened to be one that got out of control," said Sgt. Manny Vilar of the state park police supervisor's union, adding he was speaking on behalf of the union and not the department, according to Newsday.com

A plethora of the youthful engaged fans ended up being issued summonses for bringing alcohol to the state beach, according to Newsday.com.

Approximately 50 officers were assigned to the concert with an audience of 9-10 thousand people, said Capt. Bruce Marx of the State Park Police.Vilar said there was "massive amounts" of underage drinking.

What finally seemed to wane the crowds exuberant enthusiasm was not the police but the start of the show.

The young people were not very conscious of surrounding environment at the state beach as they left behind their empty party supplies consisting of thousands of beer bottles, cups and wrappers. According to Newsay.com Jones Beach workers were laboring to clean up the mess.

According to Newsday.com, Spokesman Jim Steen of the concert organizer Live Nation said "the overwhelming majority" of the show's 10,000 or so patrons were "behaving appropriately."

"There were some isolated incidences, very few in number, where we had a few arrests…and a couple of medical transports, which are unfortunate for what was a great night of music at the venue."

According to Newsday.com raucous behavior has been a predicament outside other O.A.R. concerts. Tailgating was banned at the O.A.R. show this past Friday at New Jersey's PNC Bank Arts Center. In 2007, 82 were arrested at an O.A.R. concert at the Holmdel venue, about an hour south of Manhattan.