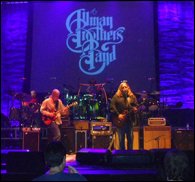 NEW YORK (CelebrityAccess MediaWire) — The Allman Brothers Band are getting set to honor the 40th anniversary of their 1972 live album Eat A Peach in a big way: they’re hailing 2012 as “The Year of the Peach.”

The Rock & Roll Hall of Fame inductees will start the year with a Grammy Lifetime Achievement Award, which “honors performers who have made contributions of outstanding artistic significance to the field of recording.”  That event will take place Saturday, February 11 during Grammy Week in Los Angeles and the group will be mentioned on the Sunday, February 12 national TV broadcast.

“It’s shaping up to be a great year,” says Butch Trucks, who co-founded the band in 1969 with Gregg Allman, drummer Jaimoe, guitarist Duane Allman, bassist Berry Oakley and guitarist Dickey Betts.  “We just wanted to make music that was honest and play it for friends, which is pretty much what we’ve done.  It’s an honor to be able to be recognized like this.”

Soon after the Grammy Awards, the band will launch their annual residency at New York City’s Beacon Theatre, where they will perform 10 shows beginning Friday, March 9 and wrapping up March 25..

The Allman Brothers Band have performed over 200 sold out Beacon Shows since they began the March tradition in 1989.  Their 2003 run was captured on the gold-selling Live At The Beacon Theatre DVD and the One Way Out CD, which features the Grammy-nominated track “Instrumental Illness.”

In April, the group returns to Live Oak, FL, where they will host their 8th annual Wanee Festival on April 19-21.  The full line-up for the three-day festival has yet to be confirmed but previous artists have included Widespread Panic, Robert Plant & Band of Joy, Steve Miller, the Black Keys, O.A.R., Levon Helm, Buddy Guy, Little Feat, Bob Weir, Stephen Stills, Gov’t Mule and the Derek Trucks Band.

In 2011, the group aligned with Entertainment One Music to market two signature band-owned labels: Peach Records for the sales of its previous Sanctuary label releases and new live recordings of the current band as well as the Allman Brothers Band Recording Company for the release of archival recordings featuring the original line-up including the late Duane Allman and Berry Oakley.