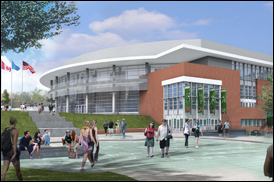 The project involves renovating the existing arena and adding new portions to the north, south and west to create a state-of-the-art, multi-use entertainment complex with improved interior spaces and a landscaped outdoor park.

The project is scheduled to begin in February, 2011 and be completed in the fall of 2012.

The ECCCA entered into an agreement with Friday/Sink Combs Dethlefs, Joint Venture Architects to handle the design work. Sink Combs Dethlefs is an
Internationally renowned sports facility design firm who has worked on dozens of large arena projects including the Sovereign Bank Arena, HP Pavilion, Ford Center, and the Copps Coliseum.

Sink Combs Dethlefs is joined in the Joint Venture by Friday Architects/Planners, a Philadelphia based firm with an established 40 year reputation developing inventive design solutions for community, public, recreation and sports clients.

Friday also has a successful record working on prior state administered projects.

“We are thrilled with the selection of such an experienced design team
which will allow us to intelligently reuse space and creatively redesign our facility,” said John “Casey” Wells, Executive Director of the ECCCA according to the press release.

The Pittsburgh based construction-management firm, Turner Construction Company, will oversee the construction of the $42 million project. The firm will provide agency construction management services, supervising the contractors who perform the actual construction work.

The scope of the construction/renovation includes numerous design improvements, with the most significant being the addition of arena seating and circulation areas.

On the exterior, the arena will undergo a complete facelift and look like a brand new building.

The facility will boast numerous windows and brick accents and will feature a welcoming multi-story glass entrance. A new, flexible landscaped plaza will also be created and will link the arena to Jerry Uht Ballpark and the Warner Theatre.

The Tullio Arena, which draws over 20,000 visitors a month, is the home of three Erie sports teams: the OHL Erie Otters, the NBA D-League Erie BayHawks, and the SIFL Erie Explosion.

In addition to sporting events, the arena is also a performance venue for concerts, tournaments, ice shows and other special events. The ECCCA, which also manages the Bayfront Convention Center, the Warner Theatre and Jerry Uht Ballpark, will now focus on large sporting events and concerts in the arena.

Improved arena facilities will give the sports teams a tremendous advantage in better player recruitment and retention. Erie BayHawks President Matt
Bresee comments, “It’s a great opportunity to create a better experience for the fans and a better experience all around. The new facility will put us in a better position to seek NBA exhibition games.”

On the hockey side, Shawn Waskiewicz, assistant general manager for the Erie Otters said, “It’s something we’ve been waiting a long time for and we’re very happy. It’s one of the best places to play in the OHL, and it’s only going to get better now. In the future, we will certainly bid for the OHL All Star Game and Memorial Cup championships.”

Music fans will also have a loud reason to cheer. The increase in concert seating will attract larger, national touring concerts to the Erie area. “With more seats, the bands will be bigger and production will be larger,” said Stu Green, promoter from Magic City Productions, who promoted the first concert in the facility, The Beach Boys in June 1983.

Governor Ed Rendell has pledged $32 million over the next two years for the project, with an additional $10 million in funding coming from an Erie County capital-improvement bond that will provide the local share of funding. “We need to build a facility that compares to, or outshines, other venues in our market size.

This funding will allow us to develop a premier arena with a strong competitive edge. We are deeply committed to bringing world-class facilities and entertainment to the Erie area,” said John “Casey” Wells, Executive Director of the Erie County Convention Center Authority.

The Tullio Arena was built for $9.3 million in 1983. Double-digit inflation forced a scale back of the original designs and only minor improvements have been made over the years.

A gallery of architectural views and project updates can be found on the Erie County
Convention Center Authority’s website, according to the press release.