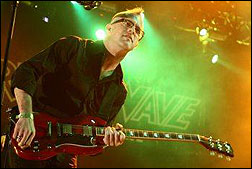 AREZZO (CelebrityAccess MediaWire) — The final curtain has been come down on the 2006 Arezzo Wave Love, the 20th anniversary. The Festival was a huge success, drawing over 170,000 people over the 12 different areas dedicated to the festival. All the stages in the morning, afternoon and evening, whether musical or non-musical, witnessed extremely interested and attentive crowds.

The obvious focus of the Festival was the Main Stage at the communal stadium which drew in a vast selection of artists of such as Skin, Sinead O'Connor, Gianna Nannini, Daniele Silvestri, Marlene Kuntz, Bandabardò and many others.

The ticket pricing experiment proved a success (a new initiative in which all tickets after 9.15pm had a charge of 5 euros). This initiative allowed the Festival to continue as a free festival in so far as those who wished to enter for free could still do so before a certain time.

This "experiment" was in part necessary due to both the cut in local government financial support and due to a lack of investment from private sponsors. The experiment however had a dual purpose: to sustain the Festival in financial terms and to encourage the public to come earlier to see the very first performances since, as Valenti himself told journalists, "Italians have this tendancy to go to the concerts with the biggest names which differs from other European nations where the people attend festivals right from the very first note." The public responded in a mature fashion, many picking-up on the invitation to come earlier, but still with huge sales at the ticket office. The number of tickets sold did in fact reach 50,000.

All aspects of Arezzo Wave worked perfectly, including the Wake Up and Psycho stages dedicated to morning and afternoon concerts, which played host to not only the regional competition winners but Fabri Fibra, Amari, Marco Parente and Cesare Basile, and also the highly anticipated and appreciated performance by Marky Ramone.

An impressive number of people also came to see CultWave, and all our non-musical events, embracing all forms of culture from contemporary dance to comics, literature, theatre, cinema and cabaret. Elettrowave was also a huge sucess, the event of events when it comes to club culture, a European reference point in its sector. Our website, www.arezzowave.com received 100.26% more hits than last year, largely thanks to this year's online live streaming.

The closing press conference of the festival featured Gianna Nannini, star of the last day of Arezzo Wave. On the closing night the audience appreciated the grunge rock of the Americans Greg Duli and the Twilight Singers, the extraordinary jazz musicians from Japan Soil and Pimp Sessions, and finally Gianna Nannini who played a very 'rock' concert during which she sang past and present hits and was joined by the audience. – CelebrityAccess Staff Writers