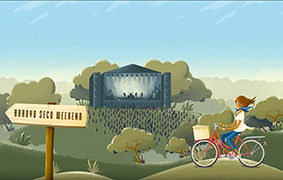 PASADENA, CA (CelebrityAccess) — After its highly successful debut in 2017, AEG’s Goldenvoice announced the lineup for the 2018 return of the Arroyo Seco Weekend.

When the festival returns to the Rose Bowl on June 23rd and 24th, it will feature a lineup with headliners that include Neil Young + Promise of the Real, former Zep frontman Robert Plant and his new group the Sensational Shape Shifters, the Kings of Leon, and Jack White.

Other artists on the bill include Gary Clark Jr., Los Lobos, North Mississippi Allstars, Shakey Graves, and Trampled by Turtles among numerous others.

As well, and perhaps an homage to the Desert Trip festival, Arroyo Seco’s lineup has a place for veteran rockers too and the bill includes acts such as The Pretenders, Alanis Morissette, Third Eye Blind, and The Bangles.

In an interview with the Pasadena Star News, Goldenvoice’s Paul Tollett said the lineup was crafted with an eye towards the success of last year’s festival.

“We just felt last year that the music really connected with the people who were there, that it was very multi-generational,” Tollett told the newspaper. “I was with my dad watching my brother on stage while my son was running around. I think that’s where we want to land in this festival. My dad at 84 is totally enjoying himself while my kid is running around on the grass.”

The festival, which bills itself as an experience for music fans who want something more than the usual dusty, port-a-potty experience of most outdoor music fests, also includes sumptuary fare from some of the best restaurants in the Los Angeles culinary scecene, including Beer Belly, Bourbon Steak, Cassells, and Block Party.