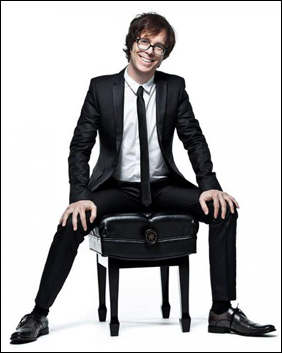 New York, NY (CelebrityAccess) – Ben Folds has announced details of a landmark new album slated for digital release in the spring with a vinyl release to follow in the late summer.

The upcoming album will showcase new pop songs by the multi-platinum-selling singer/songwriter/producer recorded and arranged in collaboration with yMusic – a critically-acclaimed NYC-based sextet, along with the debut recording of Folds' critically acclaimed "Concerto For Piano and Orchestra." Recorded in just under two weeks in New York, Los Angeles, and Folds' own historic RCA Studio A in Nashville, the album is marked by its forward-thinking studio craft and creative spontaneity.

"I don't recall ever being quite so excited about an album I'm making," Folds says. "I'll let you decide if that's a good thing or not. It's just that we don't often get to make a record that we've never heard before. The arrangements you will hear on this record are straight up rock – not ornamentation. The odd instrumentation – piano, cello, viola, violin, flute/piccolo/alto flute, trumpet/French horn, and clarinet/bass clarinet, with no bass and more often than not, no drums – is yielding something that I can't wait to release. It's a pop record, if that's what you call what I write. "

Folds with yMusic will herald the new album with a kick off tour run starting in late April in a very special series of residencies in New York, Chicago, Boston, Baltimore, Philadelphia, Pittsburgh, Portland, ME, Charlottesville, Richmond, Durham, and Washington, DC. The multi-night stands will see Folds and yMusic as his band appearing at venues spanning intimate clubs to concert halls – complete details will be unveiled soon. Ben Folds with yMusic will also make an exclusive festival appearance at this year's Bonnaroo Music & Arts Festival, set for Friday, June 12th in Manchester, Tennessee, and other possible dates together throughout the year.

Having spent much of 2013 performing his "Concerto For Piano and Orchestra" with symphony orchestras around the world, Folds was eager to continue exploring new sonic landscapes but with the feeling and flexibility of playing with a "band."

Folds first found international success as the leader of the Ben Folds Five. His subsequent solo career has seen the release of multiple studio albums, a pair documenting his renowned live performances, a remix collection, music for film and TV, an all a capella record, as well as numerous collaborations with artists spanning Sara Bareilles to William Shatner.

In March 2014, Folds premiered "Concerto For Piano and Orchestra" accompanied by the Nashville Symphony. Since then, he has spent much of his time touring around the globe, performing the three-movement concerto and orchestrations of his classic pop hits before sold-out crowds with some of the world's greatest symphony orchestras.

A Nashville resident, Folds owns and operates the historic RCA Studio A. The studio is the multi-platinum artist's creative hub, where he composes, collaborates, produces and records his genre-defying work, as well as that of other artists. Folds has earned universal respect and praise for his insight as judge on five highly rated seasons of NBC's a capella competition series, The Sing Off. In addition, he has made cameo appearances in a variety of film and TV projects, including a role on NBC's Community.