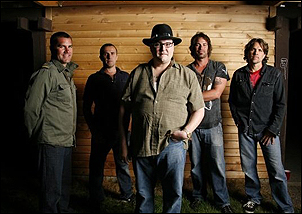 PRINCETON, NJ (CelebrityAccess) — GRAMMY award-winning band Blues Traveler have announce the release of their new album, Blow Up The Moon, out April 7th on Loud & Proud Records. A collaboration between various artists, Blow Up The Moon sees Blues Traveler keep an open-minded perspective on making music and enlists an eclectic mix of songwriters influenced by the band's remarkable 25+ year career that includes multi-platinum albums and a commanding live show that continues to draw thousands of fans.

"We wanted to experiment with co-writing since we usually try to do everything in-house, in this misguided homage to The Beatles," says singer John Popper. Blow Up The Moon allowed Blues Traveler to expand their musical palette, while holding the foundation of their distinct and explosive brand of rock. "We found quality writers to see what they could bring to us as a band, and also people who could see our strengths, something that's hard to see for yourself." Blow Up The Moon features collaborating artists Thompson Square, Plain White T's, 3OH!3, Hanson, Jewel, Secondhand Serenade, JC Chasez (*NSYNC), Bowling for Soup, New Hollow and Thomas Ian Nicholas.

"The thing took on a life of its own," adds guitarist Chan Kinchla. "We had so much fun reinvigorating our songwriting. We all tried to inspire something great within, especially since all of these artists are different from us and what we do."

Blow Up The Moon enabled all of these musicians to broaden the idea of genre and help it lose its meaning.

"Music is never supposed to be monogamous," says Popper. This unbiased standpoint made the collaborations work so well, evident in opening track "Hurricane" with electronic duo 3OH!3, and "Matador" written and performed with Thompson Square.

"We all want to push boundaries," Popper said. "Generally, Thompson Square stick to love songs, but here they are writing a philosophical statement about how the industry will embrace you and then turn on you."

Blow Up The Moonis a remarkable collection of songs and rich songwriting that proves there are a lot of different ways to write songs, with a lot of different people and still arrive at the same place. "This was definitely an organic process that worked. It's something to be proud of," says Kinchla.

Loud & Proud plans to release the album on both CD and vinyl in North America via RED Distribution (a division of Sony Music Entertainment) and in the rest of the world through earMUSIC.