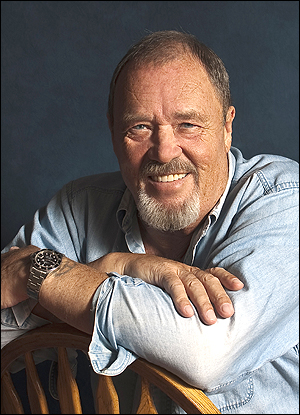 (CelebrityAccess) – The latest album by vocalist David Clayton-Thomas, "Soul Ballads," is now available in the U.S. on Airline Records after its initial release in Canada (where the singer resides), consists of 10 soul ballads, each reinterpreted by Clayton-Thomas.

“The keyboard player for Blood, Sweat & Tears for many years during the ‘80s was Lou Pomanti. And he’d been bugging me for the longest time to do an album of all those great songs that we used to do together back in the old bar days, when we played five shows a night on what they called the Yonge Street strip here in Toronto,” says David, who was in the midst of completing his autobiography and about to receive his star on Canada’s Walk of Fame when he decided to make this album. “I didn’t have much new original material. But I called Lou up and I said, ‘Lou, I think the time has come. Let’s do it!’”

In addition to playing piano throughout, Pomanti produced the set in Toronto. “We didn’t go looking for obscure songs that nobody had ever done before. We went looking for those great iconic tunes,” Clayton-Thomas continues. “We decided to do them with a full orchestra: 15 strings, eight horns, rhythm, percussion, the whole bit. And of course, utilizing modern recording studios.”

Assembling the set list was a labor of love. “They’re just basically songs I’ve always wanted to sing,” David says. “A very challenging album too, because if you’re going to go and put vocal performances up against Otis Redding and Sam Cooke and Ray Charles, you’d better be on your game, you know? Pretty tough competition. But we just set out to basically pay tribute to all those artists and those great songs.”
The set opens with David’s rendition of Gladys Knight & the Pips’ “Midnight Train To Georgia.”

"We stuck very close to a lot of the arrangements, but I didn’t want to just clone the arrangements and make it like a cover album,” he says. “We wanted to bring our own thing to it. So since I don’t have the Pips, and I’m a huge Gladys Knight fan–I think she’s one of the greatest singers ever–we decided to do the background parts with the horn section instead.”

Few 1960s soul anthems pack a more powerful punch than Sam Cooke’s hopeful “A Change Is Gonna Come,” its message resonating strongly with David. “I idolize Sam Cooke, and I had sung ‘A Change Is Gonna Come’ a thousand times in the old days,” he says. “So it just fell right back into place very, very easily.” Curtis Mayfield and the Impressions’ similarly inspirational “People Get Ready” receives a welcome revival on the set as well.

David underscores his love for Otis Redding by revisiting two of his Stax/Volt classics: the tender “I’ve Been Loving You Too Long” (which Otis wrote with Chicago soul great Jerry Butler) and Redding’s contemplative posthumous smash, “(Sittin’ On) The Dock Of The Bay.” “Otis Redding was one of my idols, along with Bobby ‘Blue’ Bland and Ray Charles,” he says. Roly Platt’s harmonica winds plaintively through Clayton-Thomas’ remake of “Dock Of The Bay.” “That’s because I can’t whistle!” David laughs.

That enduring allegiance to Ray Charles catalog is immediately apparent on Clayton-Thomas treatments of Charles’ versions of “Ruby” and “You Don’t Know Me.” David also covers Harold Melvin & the Blue Notes’ hit “If You Don’t Know Me By Now” (the original featured Teddy Pendergrass).

“The song I’m really intrigued with on the album that I like the most and has been getting the most airplay up here in Canada is ‘Sunny,’” he reports. “And that’s a song we did totally different. We did it as a slow ballad, as opposed to the up-tempo version that I had heard.”