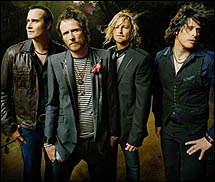 NEW YORK (CelebrityAccess MediaWire) — Atlantic Records has filed a lawsuit against Stone Temple Pilots frontman Scott Weiland and the band's drummer Eric Kretz, accusing the duo of trying to escape prematurely from their contract with Warner.

In the suit, filed in New York's U.S. District Court, Atlantic contends that the pair have allegedly threatened to stop performing and want out of their contract unless the label modifies the the deal. The label contends that the band owes them an album with options on two more, if the label wants them.

The label further contends that the duo are attempting to utilize California law to escape from their contract when the pact should be governed by the laws of New York and that their efforts thusly "have given rise to a definite, real and substantial controversy between the parties that threatens to harm Atlantic's business."

Stone Temple Pilots rose to fame in the late 1990s during the "grunge" period and had delivered five studio albums and one compilation album for Atlantic before they band broke up in 2002, at least in part due to challenges presented by Weiland's apparent substance abuse issues. After Weiland's departure, Atlantic released guitarist Dean DeLeo and bassist Robert DeLeo, who both reportedly wanted to pursue solo careers.

Weiland went on to join supergroup Velvet Revolver but after some legal troubles and another trip to rehab, got axed from VR and subsequently announced that he was rejoining STP.

"Not so fast" says Atlantic, who noted that if the boys were getting the band back together to record and tour, that the label was entitled to the rights to any albums, plus legal fees. – CelebrityAccess Staff Writers