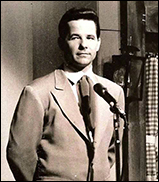 BAKERSFIELD, CA (CelebrityAccess) — William Robert Mize, an American country music artist who helped to define the Bakersfield Sound, has died. He was 88.

An Arkansas native, Mize was raised in California's San Joaquin Valley, where learned guitar, most notably steel guitar, at an early age. While in his early 20s, he moved to Bakersfield, where he secured a job as a DJ on KPMC and formed a band which started performing local gigs.

In 1953, Mize and several other local musicians, including Herb Henson, developed The Cousin Herb Trading Post Show on KERO-TV Bakersfield, which helped to spread the gospel of Bakersfield country music to a wider audience. The show would feature early television appearances by future country music luminaries such as Merle Haggard, Bonnie Owens, and Ferlin Husky, but also presented contemporary nationally recognized artists such as Patsy Cline and the late, great Hank Williams.

Mize later expanded his television footprint to Los Angeles, appearing on weekly shows in the market such as Town Hall Party, The Hank Penny Show, The Cal Worthington Show and others. He was then tapped to host Gene Autry's Melody Ranch on KTLA and landed his own syndicated show from Bakersfield called the "Billy Mize Show."

In addition to his extensive television work, he also enjoyed a career as a recording artist, scoring a number of modest hits, first on Decca in 1966 with "You Can't Stop Me" and then on Columbia Records, Imperial Records, and United Artists.

He also wrote hits for other artists, including "Who Will Buy the Wine" which Charlie Walker scored a top 20 country with in 1960 and "Til Temptation Gets The Better Of Me" which Kay Adams recorded in 1967.

In 2015, Mize was the subject of "Billy Mize and the Bakersfield Sound" that recounted his role in the development of the genre.

According to Bakersfield Now, Mize is survived by two daughters.