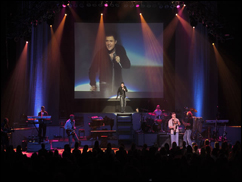 LONDON (CelebrityAccess MediaWire) — Bandit Lites' busy summer continues with lighting supply for the UK Arena tour of the Osmonds’ 50th anniversary tour. Bandit Lites has serviced many other of the Osmonds’ live shows and Donny Osmond tours in the past, and were a logical choice of supplier when the tour kicked off in the UK.

Lester Cobrin, Bandit Lites UK Chief Executive, commented, “It is a pleasure to work with artists that are as experienced and talented as the Osmond family.”

The lighting rig was designed by Mike Frogge, who's worked with Donny Osmond for many years.

The main focus was to highlight the family. They needed a rig that was relatively straightforward, and that could also be reduced in size easily when needed.

All lighting was controlled from a WholeHog II console, chosen specifically because of its availability when the tour goes on to visit Asia, after Australia.

The challenges on the UK leg involved covering the 7 Osmonds with 4 follow spots and ensuring that they were evenly lit at all times. They are perfectionists when it comes to the show, so plenty of attention to detail is needed from all departments at all times.

The show also featured 20 songs in the 2-part set, encompassing over 30 Osmonds classics including the medleys. Some of the lighting was triggered by timecode from the Burford video server that had been specially customized by Donny Osmond, who was actively involved in the show’s video.