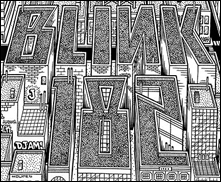 NEW YORK (Hypebot) — Newly reunited punk-pop rock band Blink-182 recently released their new album, Neighborhoods. In addition to some clever marketing initiatives set forth by the band’s marketing team, Blink-182 has integrated with SoundCloud, SimpleGeo, Envolve, and more to allow their fans to listen to the new album with other people within their own geographic region.

Segmented by real-world neighborhoods and using the fan’s current geographic location, fans can stream the new album on a page that'll display who else in their area is in the same “Room” as them – similar to Turntable.fm.

Here’s a breakdown of who / what was involved in the development:

SoundCloud – Used the Stream All Audio cross-browser and device in addition to providing a ton of analytics on who’s listening to what.
SimpleGeo – Powers nearly all of the “geo” features, including but not limited to finding your neighborhood, understanding the shape of it, and seamlessly plotting it on the map.
Envolve – Powers hundreds of simultaneous chat rooms.
PolyMaps – SVG-based mapping engine that integrates into SimpleGeo and CloudMade tiles.
SoundManager2 – Serves up audio via Javascript to the browser.
Geocoder – Powers the Address Lookup function with international support backed by some major companies like Google, Yahoo, and Bing.
Chartbeat – Seamless realtime tracking
Skeleton – Powers the “elastic” layout that makes the page layout resize nicely down to mobile devices.