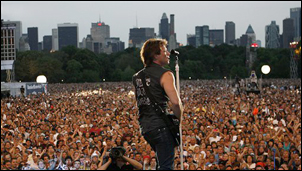 NEW YORK (CelebrityAccess MediaWire) — Bon Jovi will be the very first artist ever to appear across the many brands of NBC Universal in a unique "Artists in Residence" partnership. In the exclusive agreement, Bon Jovi's music/appearances/performances will be widely seen and heard across the multiple brands and platforms of NBC Universal. The announcement was made by Jeff Gaspin, Chairman, NBC Universal Television Entertainment.

The "Artists in Residence" project coincides with the November 10th launch of the band's new studio album, The Circle.

The project offers a unique opportunity for NBCU to work with Jon Bon Jovi and the members of the band, through interviews, musical guest appearances, and guest-starring roles, to provide exclusive and compelling content across the company's many brands — its news and cable information platforms, its cable entertainment, its broadcast network and digital assets — and allow the band the opportunity to promote The Circle to a broad, diverse audience that cannot be matched in the industry.

"By assembling a unique mix of personal appearances on a variety of its brands, NBC Universal has the ability to offer Bon Jovi the opportunity to reach a wide audience in a variety of compelling ways, while at the same time making interesting, exclusive content available to the properties of NBCU," said Gaspin.

As part of the "Artists in Residence" program, Bon Jovi has confirmed appearances on a number of NBCU platforms including the special "Bon Jovi Month" on the "Today" show in November during which they will appear live on the program on all four Wednesdays that month, capped off with a special concert performance on the plaza on Wednesday, November 25th.

Additionally, Bon Jovi will appear on several NBC Entertainment programs and be the featured guest on Bravo's "Inside the Actors' Studio." Jon Bon Jovi will be the subject of a "USA Character Showcase," which will highlight Jon as both an artist and philanthropist in an on-air and on-line campaign. He will be a featured panelist at a USA Network and Tom Brokaw-sponsored "Characters Unite National Town Hall," about overcoming social injustices, in Washington, D.C. on Wednesday, December 2. Jon will also be featured on NBC's Nightly News with Brian Williams, as well as in the company's award-winning public service campaign "The More You Know" with spots running on NBCU's cable and broadcast networks. The band's music will also be heavily integrated throughout NBC's network and cable programming.

Bon Jovi's lead single from The Circle — "We Weren't Born To Follow" — was written (and co-produced) by Jon Bon Jovi and Richie Sambora, and was produced by John Shanks, who worked with Bon Jovi on their last two albums, Have A Nice Day (2005), which featured the Grammy winning single, "Who Says You Can't Go Home," and Lost Highway (2007), which debuted at #1 on the Soundscan charts in the U.S. and around the world.

The resulting "Lost Highway World Tour" — which famously started with 10 triumphant nights in New Jersey and came to a close with an historic free concert in New York City's Central Park and two sold-out nights at Madison Square Garden — was ranked as 2008's #1 top-selling tour around the world according to Billboard.

Bon Jovi has, for more than two decades, been one of the most successful rock bands in the world. Globally, the Grammy Award-winning band has sold more than 120 million albums and performed more than 2,600 concerts in over 50 countries for more than 34 million fans. –by CelebrityAccess Staff Writers