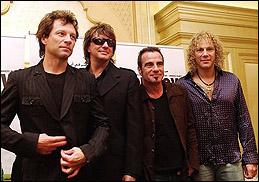 Held on May 20th in the gardens of the Emirates Palace Hotel, the crowd ranged from hard-core fans to teens too young to remember the band's chart topping days The National reported. Still, its Bon Jovi, a band that's sold more than 120 million albums in their history and still regularly plays to SRO'd arenas.

It was the band's first visit to the United Arab Emirates, a place that has become increasingly of interest to western promoters and touring artists alike.

"It took us a long time to get across the desert. The people have been great and everybody we’ve met has been very welcoming." joked John Bon Jovi during a press conference.

The event was produced by AEG in partnership with Mubadala, a government backed firm working assiduously on developing international business opportunities for UAE, including enhancing tourism to the region. They have staged several major concerts at the within the last year, including performances by Sir Elton John and that rogue Justin Timberlake. Hotel officials told the National that they expect to hold at least two more concerts before the end of the year. – CelebrityAccess Staff Writers