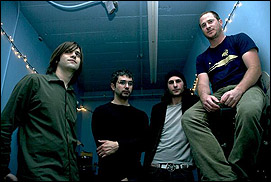 LOS ANGELES (CelebrityAccess MediaWire) — A new storm is brewing for teen pop sensation Miley Cyrus, AKA Hannah Montana. Fresh from the shocking revalations of her naked back on the cover of Vanity Fair (Hey, it was Annie Leibovitz after all), Cyrus is now facing allegations that she swiped the song "Scott Doesn’t Know" by the band Lustra and reworked it into her hit "Rockstar."

Lustra's version of the song was featured in the lamentable 2004 Matt Damon movie "Eurotrip" and features a fairly basic guitar riff that, on its face, sounds superfically similar to the guitar work in Cyrus's "Rockstar." A spokesman for Cyrus responded to the issue by noting that Cyrus doesn't write her own music and referred the issue to her corporate chums at Disney.

To settle the issue, Lustra has invited Cyrus to join them onstage at L.A.'s Viper room on May 29th to perform her song "Rockstar" alongside of the band's rendition of "Scotty Doesn’t Know." to let the fans decide. No word has yet descended from the Cyrus camp as to whether she will take them up on their generous offer.

The whole affair forces one to wonder why Lustra would call attention to the fact that they were the perpetrators "Scotti Doesn’t Know" in the first place. – CelebrityAccess Staff Writers