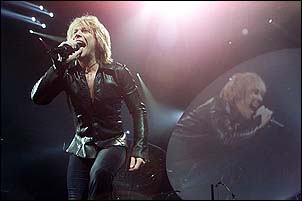 (CelebrityAccess News Service) – Capping off an unprecedented year, Bon Jovi will ring in 2004 with a special New Year's Eve performance, "Bon Jovi: Full House, The Concert From the Boardwalk" available only on Pay Per View. After playing sold-out shows to more than two million people in arenas and stadiums on four continents, and garnering Grammy nominations for a third consecutive year, the band went back into the studio to re-record their most beloved songs in an exciting and innovative new way. The result is "Left Feels Right — Greatest Hits … with a Twist," an album that debuted in the Top 10 in more than 25 countries and has received critical acclaim from fans and critics alike. Now, for the first time, fans will have a chance to see these songs come to life through a unique performance of the new arrangements available only on Pay Per View.

Premiering this New Year's Eve on IN DEMAND Pay Per View, "Bon Jovi: Full House, The Concert From the Boardwalk," will be the only televised opportunity to see the band perform songs from the new album live. The 88 minute show will be preceded by 30 minutes of behind-the-scenes footage leading up to the broadcast of the performance. The concert premiers on New Year's Eve at 6:30pm and 9:00 pm ET — with a special pre-show beginning at 6:00 pm — but fans will have the opportunity to order the special throughout January.

"This Left Feels Right — Greatest Hits … with a Twist" is a collection of familiar songs as they have never heard them before. Each song has been broken down to its core elements, then re-discovered and completely reworked, taking it in an entirely new direction. "This set out to be an acoustic record," says Jon Bon Jovi, "but then it became an eclectic record. It took a left turn and never looked back. It became a reinvention, old friends in new clothes." –Jane Cohen and Bob Grossweiner