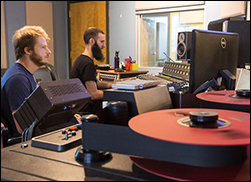 (Hypebot) – The Boston music scene is a lively, ever-changing one, but whether you're an engineer or a musician it can be a difficult environment to thrive in. Here we look at how Boston-based non-profit The Record Co. is working to make access to studios and professional opportunities an affordable option for all.

Guest post by Kevin Cornell of the TuneCore Blog

Boston, Massachusetts is home to over 250,000 college students. With institutions like Harvard, M.I.T., Berklee College of Music, Emerson, Boston College and a slew of others, it’s a given that you’d see plenty of artists and bands finding their legs in a major U.S. city – whether they’re undergrads meeting at a local party or show, or a grad student furthering their music career by way of education. Growing up in the area, I recall being obsessed with bands in the ‘local scene’ – catching the T to see bands play in places from Elks Lodges to 18+ venues that I had to ‘borrow’ an ID to get into. But even then I noticed a turnover, as bands would migrate to other parts like New York and L.A., or venues with all-ages access would close unexpectedly.

While this isn’t uncommon, there’s still a lot to love about Boston’s music scene, but it can be a difficult place to live and survive as a musician or engineer. And what about the potential fans who don’t know what’s in their backyard?

Enter The Record Co. – a Boston-based non-profit facility that provides access to an affordable space to record quality projects and opportunities to freelance engineers and producers. The result is a much-praised collaborative atmosphere that is helping to change the landscape of Boston’s independent music scene. Not to mention, The Record Co. does a wonderful job of showing off all Boston has to offer with their Boston Sessions collaborative mixtape series, with Vol. 2 coming out soon!

In this month’s Studio Spotlight, I spoke to Jesse Vengrove, Program Director (and engineer/musician) at The Record Co. to discuss how the non-profit’s approach to offering this kind of access and how it’s been paying off:

First and foremost, what inspired you to start The Record Co. and do so as a non-profit?
Go up to any studio owner and ask them the following two questions and you’ll probably get similar responses:

2) “Why are you doing this then?” – “I love the work and I think it’s important/has cultural and/or artistic value.”

And there you have the most informal definition of a non-profit organization.

The Record Co. was founded in 2009 and, after a failed startup (first location flooded), we moved to our current facility in 2010. The non-profit angle came out of a realization that that no one really needs to own a studio, people just need access to one.

We’ve found a way to allow artists to come in and use the facility at a price point that works for small/non-existent budgets while relying on other sources of funding to keep daily operations running. In 2017 we’re on track to host 1,100 sessions between the two rooms, so needless to say there’s a demand that we’re filling (while still seeing new studios pop up and legacy studios stay in business).

Give our readers a little bit of a breakdown of the facility overall. What sets your studios apart from others in the area?
We currently have about 5,000 sq/ft split up over 2 floors which gives us a fair amount of space. We have two studios, Studio A and Studio B (yeah, super creative!). Studio A is 2,500 sq/ft and includes a full kitchen and a lounge (with an ever-growing homage to the amazing art collection at Goodwill). We wanted it to feel like you’re walking into your friend’s living room, warm and homey. We kept a lot of the windows up there so there’s a lot of natural light, which really makes the room comfortable. There are two iso booths in there and a large live room. You can get giant drum sounds up there (and we once squeezed a 45-person orchestra in there) or you can control/segment the room with gobos. It’s a large space but we did our best to keep sightlines open so no one feels disconnected.

Studio B is our smaller vocal/overdub room. This room is a little more chic than Studio A; no windows to the outside, color-changing LED lights, leather couch. It’s a small but spacious enough so it doesn’t ever feel crowded, and everyone always loves the homemade absorption panels covering the wall. Studio B definitely has a more traditional feel to it compared to A but it’s by no means sterile; it’s still a comfortable room to work in. There’s a lounge outside the studio so there’s lots of space to spread out. Studio B has it’s own private bathroom which sounds most excellent for re-amping.

Obviously you provide a space for the many artists of Boston to record, but tell us a little more about how your setup has benefited freelance engineers over your seven-year history.
TRC is a 100% freelance studio, which means that we don’t have any staff engineers. We think it’s really important for artists to work with technical professionals that they get along with (both personally and musically) and so we enforce that every client brings in their own engineer. At this point we have 1,100 gigs for freelancers every year happening in our facility, and we’ve priced our studios in a way that leaves room for engineers to charge a reasonable rate for their services.

When clients need referrals we refer to our staff, who are all great engineers as well (but they still negotiate their own rates and get paid directly by the client as a freelancer). We also see a lot of engineers coming in from other studios around town (Q Division, Mad Oak, Zippah, Futura…) which we love.

Has the way you operate fostered its own community within the greater music scene? Do you feel you’re providing a space for collaboration and networking?
We see thousands of musicians/artists/engineers through our doors every year so I’m happy to say that it feels like we have a large community surrounding the work that that we do. We really value the face-to-face interaction that takes place in recording studio and are happy to see so many people coming out of their basements or bedrooms and collaborating. The best music doesn’t get made in a vacuum, it usually takes a team.

How do you feel that The Record Co. has contributed to the ever-changing landscape of the arts in Boston?
We’ve contributed in two ways: through direct support to artists/musicians and through an effort to raise general awareness about the great music that is being made in our city. There is an obvious need for the programming we do as there are thousands of people that have taken advantage of our studios. We have had bands and engineers tell us that we are the reason they stayed in Boston instead of moving to NYC or LA which is extremely meaningful to us and shows that there is a need for the work that we are doing.

We have also made an effort to engage music fans in Boston and let them know that you don’t need to look to NYC/LA or Pitchfork/Rolling Stone to find good new music, there’s actually tons of being made all around you. Raising the reputation and awareness of what’s happening here in Boston is a long process but it only serves to make the city feel more like home for all of the musicians/artists that struggle to live and work here in Boston.

For a city home to a quarter of a million college students and a mayoral administration hoping to retain this population after graduation, what else does Boston need to be a happier home to working musicians and engineers?
That’s a tough one and is something we talk about regularly. All-ages music venues, more (well maintained) rehearsal spaces, better public transportation, affordable housing inside city-limits…. None of these things are easy problems to solve but all would go a long way towards making the city a more hospitable place for artist and engineers.

Speaking of those college students, how does the Recor Co. interact with student artists and engineers-in-training from local colleges and universities?
We wanted to price our studio rates in such a way that artists could afford to rent an appropriate amount of time to actually accomplish what they set out to. These days the only way for artists to develop themselves is to act as their own A&R and just keep recording and tweaking until they finally land on something good.

Because we also cater to a lot of engineers who are just getting their start or haven’t worked in a studio outside of a college setting we host orientations every other week which consists of a conversation about expectations and best practices while working in a professional setting, how to avoid pit-falls that have the potential to kill the vibe for the players, and then a full technical walkthrough of the facility. We always have staff around to assist with any technical questions/issues and we do have a great crew of part-time assistants that are able to help out as well.

After six years in business you dropped Boston Sessions, Volume 1 – which resulted in a very cool development in the Rock Band video game franchise! – what led you to releasing this? What was the reaction from artists and labels involved?
We really wanted to tackle both raising the reputation of what’s happening in our music scene and also provide an economic opportunity for the artists involved. ‘Vol.1 – Beast’ featured 13 brand new tracks by 13 Boston-based artists. In total we paid 63 artists/engineers/producers to make the record, which we’re really proud of.

Artist and sponsors alike both loved the project. It was unique as it was all brand new material (not pre-recorded content) and really provided a cool cross-section of the diverse scene in Boston. We were really happy to work with Harmonix to get the album featured in Rock Band, which is by far one of the craziest things to come from the project. We also just finished up a large donated outdoor ad campaign around the city and on the trains called “Boston Music Is” which features pictures of artists from the comp. It’s great to see the city showing some love for the artists that make it a cool place to be.

The album is available for streaming on Bandcamp and Spotify and vinyl is in our web store.

What can we expect on the upcoming volume of Boston Sessions? Beyond promoting the Record Co. and the artists featured, what hopes do you have for the release?
Vol. 2 is going to be an awesome collection of new music from some great artists around the city. We really hope this go around that we not only turn heads in Boston but in other cities as well. Ultimately we want Boston to be seen as a music destination and the Boston Sessions program is just one step along that path to get there.