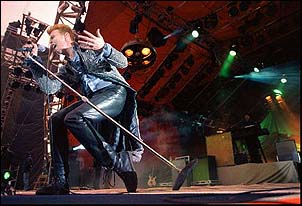 (VIP) — David Bowie has announced an extra LONDON date to his first tour in eight years.

The singer was scheduled to be playing Wembley Arena on November 25, but all of the 10,000 tickets sold out three hours after going on sale last Friday (June 20). Bowie has now announced a second show at the venue on November 26.

'A Reality Tour' will be Bowie's first full worldwide jaunt since his 'Outside Tour' in 1995 and the first London dates since his appearance at the Hammersmith Apollo last year. The string of dates will continue into 2004, taking in 17 countries over seven months, seeing the legend play in front of one million people.

Bowie's latest album, 'Reality' will also be released in October, coinciding with the start of the tour.