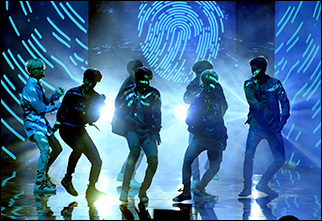 LOS ANGELES (CelebrityAccess) — The 2017 American Music Awards took place in Los Angeles on Sunday night, with Bruno Mars taking top honors with seven wins, including for Artist of the Year and Video of the Year.

Other memorable moments included P!NK and Kelly Clarkson performing together for the first time during the show opening, singing “Everybody Hurts”; P!NK’s daring performance of “Beautiful Trauma” from the side of a Los Angeles skyscraper, Selena Gomez’s return to the American Music Awards stage after a year of health challenges with her performance debut of “Wolves” with Marshmello, and collaborations from Alessia Cara and Zedd, Imagine Dragons and Khalid, Hailee Steinfeld and Alesso ft. Florida Georgia Line and watt, and Bebe Rexha ft. Florida Georgia Line with an encore performance presented by Xfinity.

Christina Aguilera took the stage to honor Whitney Houston and the 25th anniversary of The Bodyguard with an incredible homage, performing hit tracks “I Will Always Love You,” “I’m Every Woman,” “I Have Nothing,” and “Run To You.”

A lifetime achievement award was presented to legendary singer Diana Ross, who performed fan favorites “I’m Coming Out,” “Take Me Higher,” “Ease On Down The Road,” “Best Years Of My Life” and “Ain’t No Mountain High Enough.”

Staged at the Microsoft Theater, the show was hosted by Tracee Ellis Ross, star of ABC’s “black-ish,” and daughter of Diana Ross, and was produced by dick clark productions.

The full list of winners at the 2017 AMA Awards

Artist of the year
Bruno Mars

New artist of the year presented by T-mobile
Niall Horan

Tour of the year
Coldplay

Video of the year
Bruno Mars "That's What I Like"

Favorite song — soul/r&b
Bruno Mars "That's What I Like"