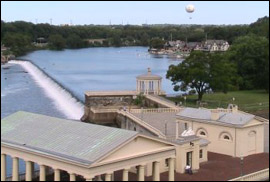 PHILADELPHIA (CelebrityAccess MediaWire) — C3 and The Electric Factory are squaring off over the rights to throw a festival in Philadelphia's Grant next summer.

The two promoters expressed an interest during a November 14th hearing in front of Philadelphia’s Fairmount Park Commission, in staging an outdoor festival in the Fairmount Park.

According to the Chicago Sun-Times, C3, the promoters behind Austin City Limits and Chicago's Lollapalooza are the front runners at this point due to their previous experience in staging large-scale festivals and their promise of 500,000 for the city's parks.

While C3 hasn't committed to calling their new festival Lollapalooza, they have stated that the new festival, if approved, would follow the same mold and feature many of the same performers.

Electric Factory Concerts was a regional promoter until they were acquired by Live Nation is hoping that their local connections and 40 year history will carry the day.

After a contentious hearing on November 14th in which some citizens expressed concerns that the park could handle the crowds drawn to big festival, the Fairmount Park Commission moved to table the decision until next month, pending a study of the impact of said event. – CelebrityAccess Staff Writers