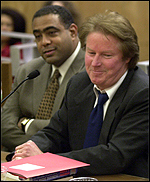 (CelebrityAccess MediaWire) — A state bill that would help private developers get federal tax breaks to build stadiums and performance halls will move on to the State Assembly after approval by a key committee vote last week.

The bill, sponsored by L.A.-based Senator Kevin Murray, would create the California Public Performance Facilities Authority, which would have the power to finance, build and operate new major facilities for sports and entertainment.

Murray, a former agent at William Morris, told the Los Angeles Daily News that the bill is aimed at creating state partnerships with private developers, allowing them to use the state's tax-exempt status to avoid paying federal taxes on revenue, including from corporate naming rights and seat licenses, generated by the facility. That revenue, in turn, would be used to help finance construction.

"I think most people would like to live in a town where there are nice places to see a show," Murray told the paper. "Because the government has not been funding that, this bill essentially takes money that would otherwise be going to federal tax coffers and invests it directly in the facility."

Murray said the bill would not involve the use of state funds. It is not aimed at any particular city in California, and noted that his district in Los Angeles would likely not be affected because the Coliseum already has a commission that operates in a similar way.

Republicans are strongly opposing the bill, arguing that the state should not be involved in what should be a local matter.

Governor Arnold Schwarzenegger has not taken a position on the bill, according to his office. –by CelebrityAccess Staff Writers